“Resident Evil: Infinite Darkness”: All We Need to Know about the Netflix’s Anime release date and Other Details 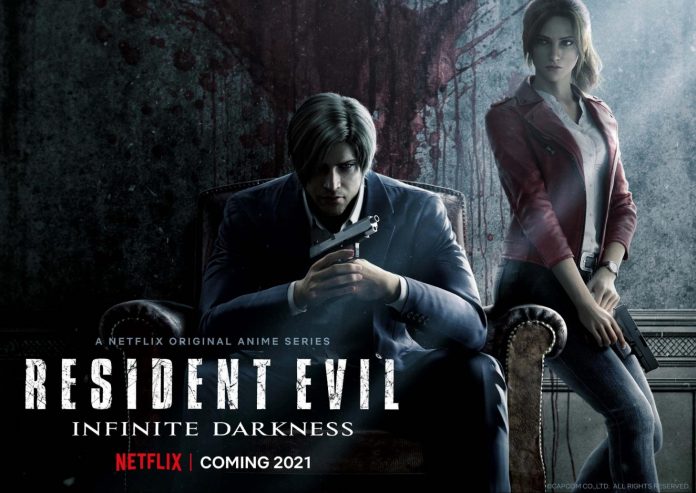 It is already heard that Netflix is developing Resident evil: Infinite Darkness for now. Before the official announcement, a teaser trailer was mistakenly published a day earlier than it’s the announcement. Netflix has dropped a new trailer of the series which will come on Netflix in June 2021.

This fantastic anime series is produced and supervised by Capcom’s Hiroyuki Kobayashi who has brought a lot of ties in the series Resident Evil to its existence which is also named as three undying classic video game like Resident Evil(Original and Remake), Resident Evil 2(original), and Resident Evil 4. The three Resident Evil animated film is also produced by Kobayashi such as Degeneration, Damnation, and Vendetta.

TMS Entertainment also had played an important role in the birth of such animated series as Sonic X, Detective Conan, Spider-Man, and Detective Gadget. Vendetta who is the producer of Resident Evil is going to be in charge of the full 3DCG animation production.

Resident Evil: Infinite Darkness has come after several years of the iconic and industry blockbuster Resident Evil 4 where we had seen Leon visited Spain for a special mission to rescue the daughter of the US President after the disaster happened in Raccoon City. After recruited by the president he becomes one of his special agents.

Netflix has revealed some extensive stories for Resident Evil: Infinite Darkness. It was started in 2006 from some trace of improper access to the hidden presidential files got from the network of the White House. The federal agent of America Leo s. Kennedy is in the group invited to the White House for the investigation of this incident. After the lights go out Leo and the entire SWAT forced to take down in front of mysterious zombies.

The staff member of TerraSave Claire Redfield had encountered a strange image by youth in the country that she was visited during the support of refugees. After become haunted by the painting that appears to be a victim of viral infection, Claire began her investigation.

On the next morning, Claire visited the White House to request t0o the construction of the welfare facility. There is a chance to meet with Leon to show the drawing of the boy. After that Leon understood some sort of connection between the Zombie outbreak at White House and the boy’s drawing but he did not say anything about it to Claire. At that time the Zombie out5break already had hit the core of the nation.

The two iconic characters Leon S. Kennedy and Claire Redfield will be voiced by the two people who are very popular and much desired in the Resident Evil fandom. The two names are Nick Apostolides and Stephanie Panisello. The duo also has voiced to the massive hit on the remake of Resident Evil 2 which was released in 2019.

Netflix has officially declared that Resident Evil: Infinite Darkness will release to stream on 8th July 2021.

Resident Evil other teaser or trailers. The first trailer of Resident Evil: Infinite Darkness had been released by Capcom on 15th April 2021 at that Resident Evil also showcase that was mainly for Resident Evil Village.  They have also claimed about the July release date but after several hours Netflix has shared the trailer.

For the purpose of the project’s existence, Netflix has dropped the first teaser trailer on 27th September 2020 that was very descriptive.

Previous articleMicrosoft Surface Laptop 4 lands in India via Amazon, start at ₹ 99,990
Next articleOPPO Reno5 A launched with Snapdragon 765G SoC in Japan