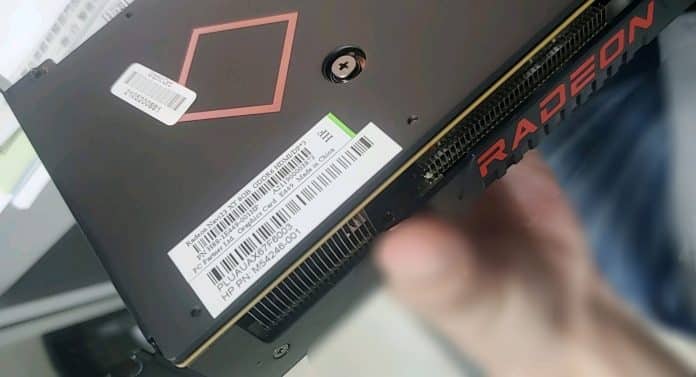 Finally, some good news for AMD fans as the budget RX 6000 series GPU seems to be coming sooner. The upcoming Navi 23 XT-based graphics card has now been leaked online with real images of the GPU surfacing thanks to @Broly_X1.

The GPU doesn’t directly mention the name of the AMD Radeon RX 6600 XT, but in the label we see its named as Navi 23 XT 8GB GPU. Obviously, this could mean that this could be nearly engineering sample by one the board partners, here it’s PC Partner Limited.

The label also confirms the fact that the GPU would feature 8GB GDDR6 memory, a drop by 4GB when compared to the RX 6700 XT. The picture also confirms the existence of four display connectors: HDMI and three DisplayPorts.

As per rumours, this AMD Navi 23 XT GPU is said to feature up to 2048 Stream Processors. It is also believed to come with a boost clock speed of 2684 MHz while sporting a memory clock of 16 Gbps and consume 130W of TDP.

The leak and rumours forms up in time because AMD will make big announcements at the Computex keynote which will given by Dr Lisa Su.

As already HP Omen 16 confirms the mobile RX 6000 series GPUs, both Navi 23 and RX 6600 series are all set to be officially announced on 1st June, and we could even see the announcement of AMD’s FidelityFX Super Resolution hopefully.