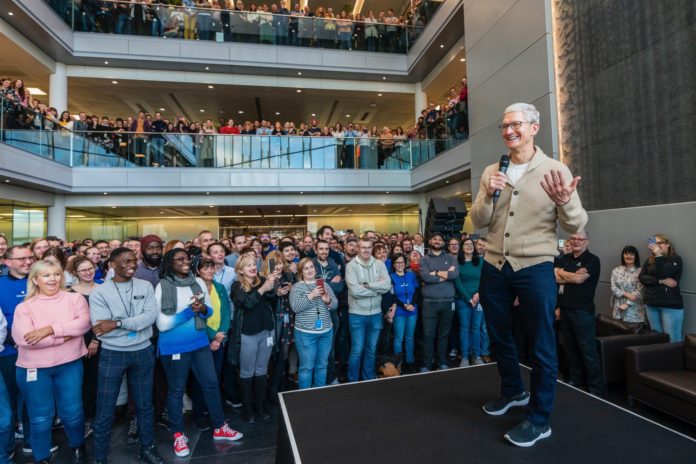 In the Epic vs Apple antitrust fight, the game developer alleges that Apple keeps too much of the revenue raised by businesses selling wares in the marketplace. Additionally, Apple’s rules are unfair and anti-competitive, according to Epic. On Friday, Apple Chief Executive Officer Tim Cook will take the stand to argue that Apple’s rules ensure a secure and seamless user experience and that developers make bank through the App Store.

Should Apple’s defenses fail and a ruling in Epic’s favor is passed, it would loosen Apple’s grip on its store and could upend the way millions of developers distribute apps to handheld device users the world over.

The implications of Epic’s struggle against Apple are not limited to the $142 billion world of apps. They strike at the fundamental role played not only by Apple but also by Amazon, Facebook, and Alphabet as the new gatekeepers of the digital economy. Amazon, for instance, provides an infrastructure to millions of small e-commerce sellers but to the same customer base, also sells its own products. Google and Facebook make money from ads alongside news and other information on their pages, but little or no control is given to the content providers over how it’s displayed–and many don’t share in the spoils.

Legislators and regulators are also examining and paying close heed to what transpires in the case.

“Win or lose, the case has the potential to draw more attention to this really serious problem of market power held by tech platforms acting as gatekeepers,” said Rebecca Haw Allensworth, who teaches antitrust law at Vanderbilt Law School, according to Bloomberg.

The industry’s powers have been an issue for decades but came to the fore during the 2020 U.S. presidential race, when Elizabeth Warren, Democratic candidate and a U.S. senator from Massachusetts, complained that tech platforms play a dual role and create conflicts of interest by both running platforms and competing on them with their own products. Warren proposed breaking up companies through a law that would designate these marketplaces “platform utilities” and mandate a separation between them and any platform participant, including their owners.

House lawmakers took up the cause last year, releasing a report that accused Apple and the other big tech platforms of abusing their dominance. It recommended that Congress pass legislation that would sharply curb tech’s power over competitors, including prohibitions on giving preference to their own products, and declare the platforms “essential facilities” that would require them to provide access to infrastructure.

Critics draw parallels to the U.S. monopolies of the late 19th and early 20th centuries, “companies that once were scrappy, underdog startups that challenged the status quo have become the kinds of monopolies we last saw in the era of oil barons and railroad tycoons,” congressional investigators concluded.

Allensworth at Vanderbilt said the Epic-Apple case has the potential to shape the larger body of lawmaking against the tech industry. “The common law changes one case at a time, and it moves two degrees each time you have a case, and before you know it, you’ve really altered the course of the common law,” she said. “If I were a big tech company, I would be very concerned that that could happen again.”

When Cook takes the stand, he’ll likely be questioned about the competitive landscape in Apple’s app strategy. He’s also scheduled to be Apple’s final witness, giving him a critical chance to sway Judge Yvonne Gonzalez Rogers, who will decide the case without a jury.

The Department of Justice is investigating Apple over its App Store practices. It has already sued Google on antitrust grounds. The Federal Trade Commission (FTC) sued Facebook, on grounds of monopolistic behavior, and is probing Amazon along with state attorneys general. To build arguments, the regulators have interviewed businesses that work with these tech giants about their experiences, many of which echo Epic’s grievances.

Debate over the industry’s gatekeeping is not limited to the U.S. On Tuesday, Germany’s antitrust watchdog informed that it’s opening a case against Amazon, exploring whether the e-commerce giant is behaving anti-competitively. Last month, the European Union hit Apple with an antitrust complaint objecting to the Cupertino-based tech giant’s requirement that developers use its in-app purchase system for payments. Regulators have also questioned the company’s ban on developers directing users to alternative ways to subscribe to a service, which is a way of circumventing Apple’s fee.

Australia’s competition regulator said last month that Google and Apple have “significant market power” in-app distribution. It noted concerns with the two companies’ restrictions that require developers to use their payment systems for any in-app purchases.

Antitrust experts, according to Bloomberg, say that one issue in the Epic case is particularly being watched,” and that could have implications for other platforms, is how the judge defines the market for games. Epic argues Apple’s App Store is the market, while Apple says there are many places to get Epic’s games, including Android and gaming consoles.”

The issue is important because if the judgment is in favor of Epic — say, by noting that people rarely switch between Android and Apple — it means Apple has a monopoly. That would mean that winning antitrust cases against Apple would become easier for companies or the government. It’s a question that hangs over the other platforms as well. Is Facebook its own market, or is there a broader market that includes companies like Twitter Inc. and ByteDance Ltd.’s TikTok?

“That’s half the battle if you’re a plaintiff bringing a case — proving market power or monopoly power,” said John Newman, who teaches antitrust at the University of Miami School of Law. “Calling a company’s product a market, it definitely opens up the floodgates to more litigation against that company because anything they do is conduct by a monopolist.”