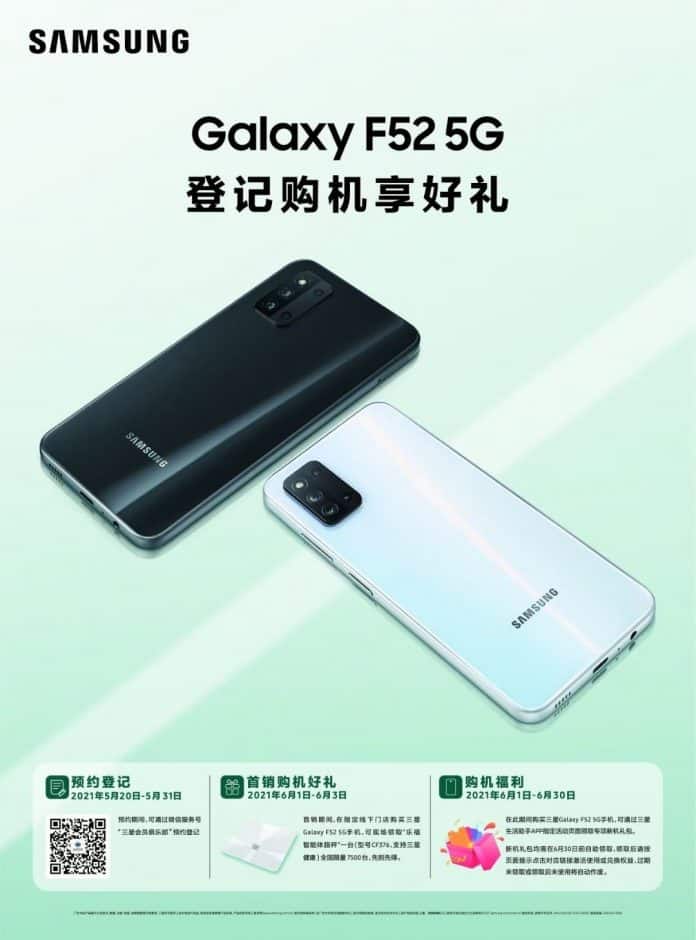 A poster for the upcoming Samsung Galaxy F52 5G has surfaced, observed by Weibo user Instant Digital. The F52 will be the first F series device in the country, the F series is limited to India. The Galaxy A52 5G is already available in China.

Despite their similarities, the difference is in their price point currently, the Samsung Galaxy A52 currently retails at CNY 3000 whereas the F52 5G will retail for 2000 CNY.

According to the post, Samsung Galaxy F52 5G will open for pre-orders on the May of 20th, Thursday. The first sale is expected to be from June 1st to June 3rd and Samsung will be providing a smart bathroom scale along with it as a freebie. More freebies are expected to be handed over by June 30th.

As far as the specs of the device are concerned, the Galaxy F52 5G will be powered by the Snapdragon 750G similar to the Samsung Galaxy A52 5G but will have a 6.57″ LCD instead of the 6.5″ super AMOLED.

The battery of the Galaxy F52 5G will be a slightly smaller 4,350mAh and will be 25W fast charging enabled. It features a quad camera setup with a 64MP main sensor and the one-of-a-kind selfie camera, albeit oddly placed is a 16MP one which seems fair enough considering the price point.

The Samsung Galaxy F52 5G will release in China and India hopefully as the Galaxy F62 is already available here. It is unclear if it will release in the North American or European markets as of yet.