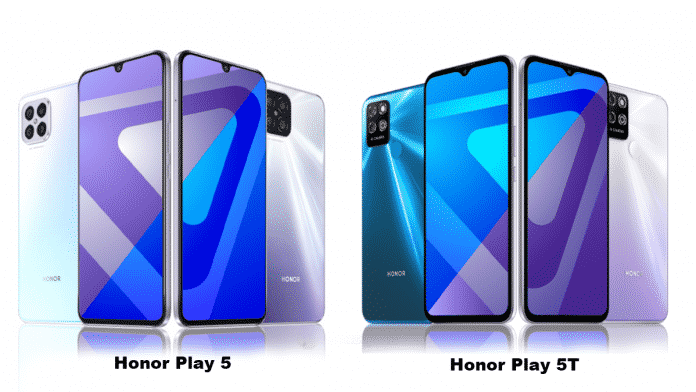 The Honor Play 5 and the Play 5T have been unveiled. The Play 5 is Honor’s latest mid-range smartphone and the starting price will be 399$. The Honor Play 5 is said to come in 2 different variants. The Honor Play 5T will retail at 187$ and will come in only one variant. Following are the specifications of the devices.

The Honor Play 5 will feature a 6.53″ wide-color gamut OLED true color screen. The benefits of this display are its ultra-thin straight edge design and a matte middle frame. Such a design will highlight all the edges and corners of the device while simultaneously enhancing the overall texture of the phone.

The Honor Play 5 will be 7.46mm thick and weigh 179g making it one of the thinnest and lightest devices on the market. It will be available in 3 attractive colors, Icelandic Illusion, Titanium Silver, and Magic midnight black.

The Honor Play 5 will be powered by the MediaTek Dimensity 800U processor, the device comes with a unique single-cell dual circuit fast charging design and will support a 66W fast charger. Honor claims that the device can charge from 0 to 60% in a matter of 15 minutes! The battery capacity however may not be a strong point of the phone. Although the company has not mentioned the capacity, most speculations place it in or under the 4000mAh range. The fast-charging capability sure does make up for it, however.

The Honor Play 5 features a quad camera setup and will come with a 64MP main sensor. The camera will support super night scene algorithms and AI photography functions along with portrait shooting.

The Honor Play 5 will come with the latest smart MagicUI 4.0 that supports the home interconnection of Honor wisdom in all scenarios with a one-click control of wisdom all scene. It is NFC enabled and supports multi-functional NFCs.