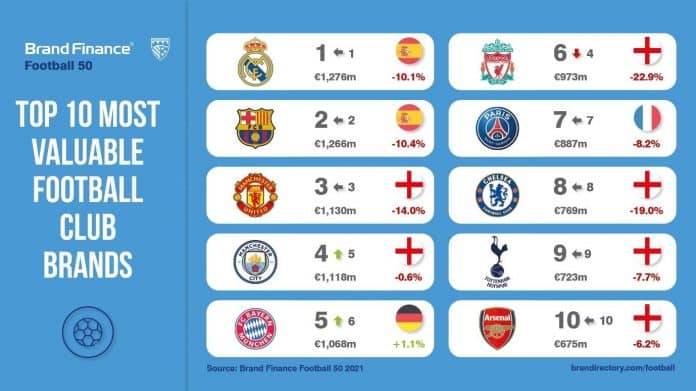 Real Madrid remains the most valuable football club brand in the world for the third consecutive year, despite recording a 10% brand value decline to €1,276 million. The club still maintains a slight lead ahead of fierce rivals Barcelona in second spot, with a brand value of €1,266 million, also declining by 10% this year.

While the LaLiga giants remain on the podium for 2021, it has now been three years since a Spanish club has reached the final of the UEFA Champions League, with the last appearance being Real Madrid’s victory over Liverpool in 2018. Despite this, both Spanish clubs have consistently been able to secure Champions League qualification year after year, with the last time either club failed to reach the groups stages now more than 20 years ago. This consistent influx of Champions League revenues and status has played a central role in both clubs’ overall success.

Close behind Real Madrid and Barcelona, Manchester United has retained third place despite suffering a 14% decline in brand value to €1,130 million. The club will be looking to capitalise on a stronger season under Solskjær – securing second place in the Premier League and booking their place in the Europa League final against Villareal on 26th May – as well as re-establishing themselves as League contenders and a powerhouse within Europe.

Neighbours and bitter rivals Manchester City are now just 1% (€12 million) behind Manchester United in brand value – the closest the two clubs have ever been in their history. Within the top 10, only Manchester City in 4th (down 1% to €1,118 million) and Bayern Munich (up 1% to €1,068 million) in 5th avoided significant brand value decreases, resulting in both clubs climbing one spot in the ranking.

Liverpool, which had seen a resurgence under Jürgen Klopp, winning both the 19/20 UEFA Champions League and claiming the English Premier League title last year, have struggled this year, finding themselves battling for a place in next year’s Europa League. This, coupled with the impacts of COVID-19, has caused the club to suffer a 23% decrease in brand value to €973 million, seeing them fall from 4th to 6th in the rankings. Resecuring their position in Europe’s premier knock-out competition will be critical in driving future growth.