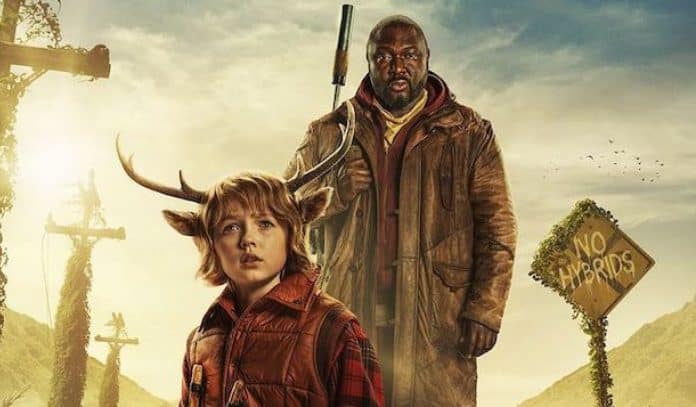 At last, the wait is over; Netflix has launched the entire official trailer of the series Sweet Tooth. This latest Netflix series is based on Jeff Lemire’s DC, or you may also say a Vertigo comic book of the actual name.

The story of this series is based on a hybrid deer-boy and a wandering loner who explores an extraordinary adventure. After releasing the first poster, the first trailer of the series arrives shortly. With the trailer, Netflix has exposed many new still images from the series with Gus and Tommy with many characters we can see throughout the journey.

This fantastic series is created and written by Lemire. In 2009, Sweet Tooth DC Comics was published for the first time under the imprint of DC Vertigo. This post-apocalyptic comic reveals Gus, a 9-year-old hybrid of humans and deer who his religious father brought up in the preservation of nature in Nebraska.

After the death of his religious father due to an unknown illness, he explores an adventure with his companion Tommy Jepperd, a very hot-headed retired hockey player.

It has come that Sweet Tooth was running officially for 40 issues which were concluded in 2013. After 8 years, Lemire eventually returned to write and paint a sequel series and gave the title Sweet Tooth: The Return. This series was published under the DC Black Label, and it is running for six issues from November 2020 to April of this year.

This upcoming Netflix adaptation is directed by Jim Mickle, who is the co-showrunner along with Beth Schwartz. The duo has also served as a writer, and Sweet Tooth’s executive producer includes some other executive producers like Susan Downey, Robert Downey Jr., Amanda Burrell, and Linda Moran.

This upcoming Netflix series is featuring Christian Convery as Gus and Nonso Anozie as Tommy Jepperd. This film is also starring Adeel Akhtar, Aliza Vellani, Stefania LaVie Owen, Dania Ramirez, and Neil Sandilands; this is not the end also Will Forte and James Brolin.

Netflix has confirmed that this series will hit on 4th June 2021. As it is an eight episodes web series, so the first episode of the series will come on 4th June, Friday.