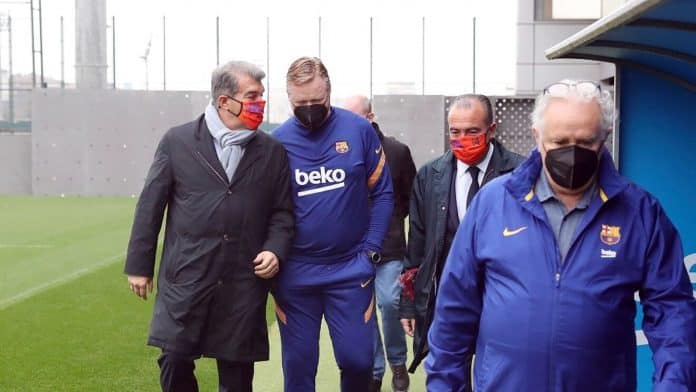 FC Barcelona’s race in La Liga ended on Sunday after the Cules lost against Celta Vigo at home from a 1-0 lead to lose 2-1. After the race is finally over mathematically, FC Barcelona management has already shifted their attention to the next season.

As per the reports, some major changes in the team are on the line which will be announced soon. With these changes, Joan Laporta, FC Barcelona’s new director will announce his arrival as well.

Laporta is trying to build the team from the scratch. The first step in his long-term vision will be the sacking of Ronald Koeman. But the question is who will take the charge at Camp Nou. As per some reports, Xavi Hernandez is in the pole position to replace Ronald Koeman.

However, Xavi becoming head coach of Barça from 2021/22 onwards does not entirely come as an accepted consensus among the technical secretaries and board members of Barça. His inexperience, and the risk of letting Koeman go after he has created a decent foundation with the team, might be factors that have caused Laporta to second-guess betting on Xavi with full certainty.

Xavi was asked about the potential return at Camp Nou. In reply, Xavi told, “I don’t know anything, I’m on vacation, really.”

Besides this, Laporta is also ready to make some key signings this summer. Eric Garcia and Sergio Aguero both are set to join FC Barcelona on free transfers from Manchester City. Memphis Depay is also in the target list.

It can be assumed that it is going to be an exciting transfer window for FC Barcelona.

Previous articleHow to pre-register for Battlegrounds Mobile India?
Next article“Sharp”: All the Details about Netflix’s Upcoming Action film