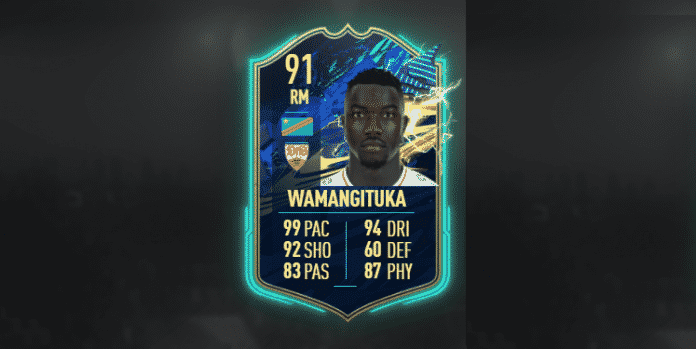 They have now also released a great SBC for 91-rated RM Silas Wamangituka.

The 92-rated RM card of Silas Wamangituka is one of the over-powered cards in FIFA 21 along with that it only requires 84 and 85 rated squads. The relatively low cost of the SBC makes it a must-do one.

Lets look at the stats of Wamangituka in details.

The Bundesliga TOTS Wamangituka card has 5* skill move and 3* weak foot. He has a height of 6’2″, which will make it easy for him to win headers. The card also has a medium attacking and defensive work rate.

The most overpowered stat of this card is the 99 pace. When combined with his 5* skill move, this max pace attribute almost makes him impossible to stop for opponents’ defenders. He also has good shooting and dribbling stats.

The card also has flair trait, and if you give a good chemistry style to increase his shooting, pass and physical, he will truly be one of the most overpowered players in FIFA 21.

This Silas Wamangituka card comes with around 250K FIFA coins which makes it all the more affordable. He is also pretty easy to link as EA Sports has introduced two RB/RWB SBC of Bundesliga players.

So, you should definitely do the 91-rated RM Silas Wamangituka Bundesliga TOTS SBC.