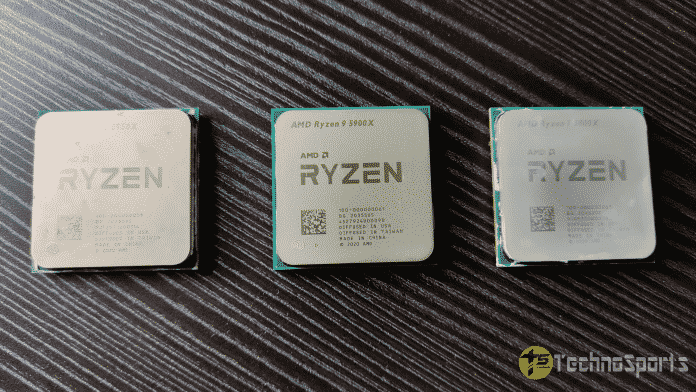 AMD launched its Ryzen 5000 processors for quite some time now, and even though there are only 4 of them, AMD still holds the CPU crown because of its incredible performance in single-core and multi-core along with great efficiency.

Even if it’s hard to say, it’s the fact that Intel CPUs at a premium level has no competition against AMD; their latest 11th Gen Core i7s or Core i9s are not that efficient enough or powerful enough to beat AMD. So, if you are making a purchase now, you are better with a Ryzen 5000 series processor.

So, we might be confused about which AMD Ryzen processor should we get; at entry-level, we still have no signs of Ryzen 5 5600; you can get the 5600X if you are looking for a budget mid-range CPU or even the Ryzen 7 5800X. If you have confusion about which one to buy, then go through this article:

Now, suppose you have made up your mind to buy either the 5800X or maybe go for the Ryzen 9s; now is the confusion about which CPU should you buy. For that, we have created this article as we had all of the three processors with us for quite some time now and will explore the productivity performance and gaming performances, ultimately help you make the correct CPU decision.

Also, why we made this comparison now because now, you can finally get all of these processors at almost reasonable prices, so it might be difficult for you to make the right call. The difference between the three processors lies with 4 Zen 3 cores; pay more get 4 more cores; now it depends on your workload and needs to get the right CPU.

Now, if you are a high-performance nerd and do not care about money, going for the Ryzen 9 5950X makes sense. Also, note that these CPUs draw far less power than Intel’s latest 11th Gen Rocket Lake processors and have a wide range of motherboards for support.

Here are some benchmarks comparing the CPUs all-together:

It is straightforward, though, on the performance front, as the more you pay better, the performance; now it depends on your needs; how many Zen 3 cores would you like to go for. All of these processors can handle tasks like Premier Pro, Blender, Photoshop and other professional applications; however, choose the CPU as per your professional needs.

To give an accurate idea about the extreme gaming performance we have paired these CPUs with the absolute best AMD Radeon RX 6900 XT, used AMD’s Smart Acess Memory feature and given all the advantages you want to give your AMD-powered gaming PC.

Here we will explore the direct comparison between the three of these CPUs, and that will surely clear your confusion:

Here are the benchmarks across a wide range of modern games:

As you see in these gaming benchmarks, undoubtedly, the Ryzen 9 5900X is the best gaming CPU currently in the market by AMD, and because it sports 12 Zen 3 cores, you expect a good multi-core performance as well.

However, you see the AMD Ryzen 7 5800X and the Ryzen 9 5950X have almost a similar gaming performance, which is not bad but not the best. So, it makes the scenario clear which CPU you should buy if all you want is gaming.

As you see in our various benchmarks, it is clear that all of these AMD Ryzen 5000 processors are great for both gaming and productivity. However, the choice is simple for gaming it undoubtedly the AMD Ryzen 9 5900X and also its a better overall value than both the Ryzen 7 5800X and the Ryzen 9 5950X.

If you really need more cores, then the Ryzen 9 5950X is for you because, with its 16 Zen 3 cores, it’s an absolute monster and can do work in a few minutes or seconds, helpful for rendering, video editing or any high-performance workloads. The gaming performance is kind of similar to the Ryzen 7 5800X, which is good enough, so for absolute best, the Ryzen 9 5950X is a must-have.

Whereas if you need an 8-core CPU for work or play, you are good with the Ryzen 7 5800X, whose price is decreasing in the US and should decrease in India as well. If you can get a good deal for the 5800X, then just go for it over any other Intel CPU.

So, whichever you pick, make no mistake as AMD’s Ryzen 5000 series processors are best if it comes to long term performance and efficiency.

Share
Facebook
Twitter
Pinterest
WhatsApp
Linkedin
Previous articleTop 5 things to take from FC Goa’s debut campaign in the AFC Champions League
Next article“Money Heist(Season 5)”: All We Need to Know about the renewal of the series