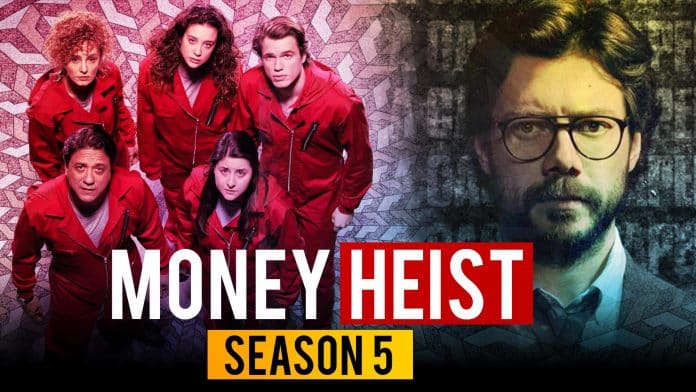 Money Heist team has been finished the shooting of the film of its fifth and final season and it is expected that the last season will become on Netflix in the second half of 2021. If you search for a most-watched non-English title on Netflix, then you find the name of Money Heist still holds the title of this genre.

On Netflix, Money Heist has acquired the record of the most-watched non-English title. We have seen that for the fourth season, this heist series has crossed all of the previous records of it. The fourth season of Money Heist got an incredible 65 million views from the viewers.

Netflix was officially declared that season 5 of Money Heist arrived in August 2020, but it took a lot of time and with this, they have also confirmed that “the Heist comes to an end”. It indicates that season 5 will be the last and final season of this Spanish series.

On the topic of Netflix’s “ See What’s Next” account, Alexa  Pina exposed that they had spent almost a year just keep thinking about how to break the band and also how to bring a professor on the ropes. They had also tried to get into situations that are mostly irreversible for many characters. The fifth part of the series is the result of it. The war has reached the most extreme and savage levels, it would also be the most excited and epic season.

Before the official renewal in August 2020, Alexa Pina and his team of writers and directors have said again and again that they have made a plan for a fifth part.

After releasing White Lines in May 2020, Pina told about the deadline and also confirmed the future of the series.

Many fans will be asked about the ending of Money Heist. It seems that there are several reasons behind it but Alex Pina exposed one of the biggest in the current interviews held on the release of Sky Rojo.

Spanish newspaper Marca had revealed that the increasingly high demand of the series stars is partially a reason for the ending of the series. It also had been seen previously that for the big ensemble casts it is very difficult to tie them to the show.

Pina is on the record also said that they had many opportunities for spin-offs. This was due to the strong identities of the characters. They had always looked for characters that would be complex, so he thought almost every character had a side that they would like to watch on a spin-off.

It is assuming that Nairobi met her demise in season 5 of the series but it has been confirmed that her character has been enlisted to appear in episode 1 of season 5. Of the series. It indicates that despite her death, we will be watching more about her in season 5. It has also informed that some more cast is going to return like Olalla Hernandez as Amanda, Fernando Cayo as Coronel Tamayo, Luka Peros as Marsella, and Belen Cuesta as Manilla.

Formula TV has been confirmed that Season 5 of Money Heist will contain 2 episodes which will be longer than the previous seasons including 10 episodes going to wrap up the series.

In August 2020, the series had made an official announcement about the two new cast members to be a feature with. The first one is Sense8 alum Miguel Angel Silvestre claimed to be a part of season 5. He wrote on his Instagram “Mamaaaa! How lucky I am? Maximo of joy!”.

It is expected that we will see him as a new villain in the final season.

The second cast member is Patrick Criado. He is well known for his roles in The Aspirant, Plastic Sea, and The King.

In September 2020, Formula TV cast courtesy had been joined by another cast member Jose Manuel Seda. He is renowned as a writer, director, and actor for his work on Yo soy Bea and also as director of the 2005 short, Transito.

We have seen in season 4 that the heist is very much is based on Lisbon now participating to the rest of the gang in the riverside of Spain. After that, the gang is facing one of the biggest challenges is that The Professor becomes the one who has been caught in red-handed. He has a gun with him and that the series come with a new rendition of Bella Caio.

It is expected that Alicia has plenty of theories about who has now gone rogue. Some on Reddit believe that her pregnancy is fake and some others believe that she is the ex-wife of Belin who had been introduced I the fourth season.

Now the gang has to work on the final stages of the Heist and start their escape. As we know that all the gang is continuing their work of melting the gold and convert them into small balls for escape. Now the most important question is if the team is managing to escape then where their freedom will manage to keep and also ill they live a normal life just like before or not as all their identities are exposed.

At first, Berlin is going to return with a lot of posts from the actor, and also Vancouver Media has teased to return. From season two most of his appearances in the series have been flashbacks that claim to continue going into the final season.

In an interview, Alex Pina told that season 5 will effectively be a war of the gang would now be pushed into irreversible situations, into the war. He said that this part is the most epic part that they had shot.

At first some rumors have been heard that the most unplausible seems to be released in January 2021. After that, there also came some rumors floated for April 2021 but it seems to be ruled out with the series not part of the April lineup.

Netflix has announced that season 5 of Money Heist will come in the second half of 2021 so it is expected that this time it will not push into 2022.