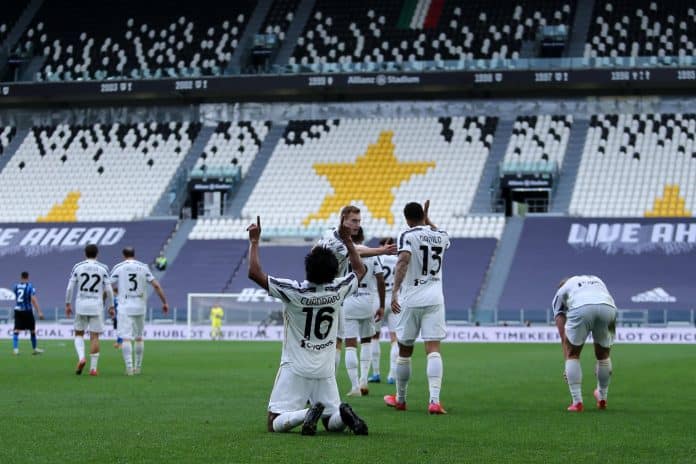 Juventus managed to keep their hopes for Champions League football next season alive with a win over Inter Milan. While the Nerazzurri might have broken Juventus’ streak of winning the Serie A, they were shown by the former Champions that they still have it in them to take it to the best in the country.

Cristiano Ronaldo scored the 777th goal of his career, taking a penalty that was saved by Samir Handanovic. However, the ball fell back to the Portuguese forward who tapped it in to open the scoring.

Romelu Lukaku would convert at the other end to level things up, with yet another penalty being given. Shortly before halftime, though, Juan Cuadrado’s deflected shot got the better of Handanovic as the Bianconeri went into the dugout leading 2-1.

Madness followed in the second half as Juventus were reduced to 10 men, as Rodrigo Bentancur was sent off after he accumulated a second yellow. Chiellini’s own goal brought hope to the visitors to at least salvage a point, but Cuadrado managed to convert yet another penalty to put the match to rest.

While Inter Milan have nothing left to play for this season, Juventus rescued three very crucial points for their season. They are now in fourth place, behind AC Milan but level on points with them. However, their hopes of finishing in the top four don’t depend on them alone.

With Atalanta sealing a spot in the Champions League, and Inter winning the title, only two spots are left to be earned. Either one of Napoli or AC Milan need to drop points if Juventus are to assure Champions League football. The two face Fiorentina and Cagliari in their 37th games respectively.