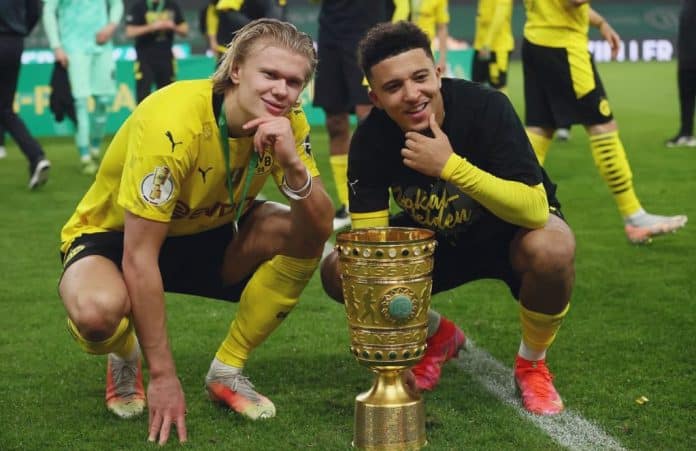 Borussia Dortmund beat RB Leipzig 4-1 to win the DFB Pokal last night at the Olympiastadion in Berlin. Two goals each from Jadon Sancho and Erling Haaland saw the black and yellow club lift their fifth German Cup at the end of the 90.

It only took Sancho five minutes to open the scoring on the night, beating Gulacsi from a brilliant curling effort from the left. Erling Haaland fended off Dayot Upamecano in a physical battle in the box to slot the ball past the keeper to double their lead.

Dani Olmo managed to pull one back for the Red Bull outfit with a powerful shot. However, an unselfish pass from Marco Reus in front of goal saw Sancho score again before halftime.  Haaland then showed brilliant balance to score the fourth, and bury the game in favour of the Schwarzgelben.

This German Cup victory was the fifth in the club’s history and the final one of Lukas Piszczek’s career, who will be retiring at the end of the season. While Edin Terzic won’t be continuing at the club, his tenure at the club will surely be marked as a success following their Pokal victory last night.

Haaland is now the joint second-highest goalscorer in Europe, with 39 alongside Kylian Mbappe. On the other hand, Sancho becomes the only Englishman to score a brace in the DFB Pokal final while Haaland does the same for this country.

Julian Nagelsmann will be disappointed not to have won a single piece of silverware despite his successful stint at Leipzig. However, in all possibility, he could be the one with the Cup next season as the Bayern Munich bench awaits.

Previous articleHere’s how the gaming industry reacts to BATTLEGROUNDS MOBILE INDIA’s pre-registration, starting from 18th May
Next articleZTE 8031 appears in TENAA certification, might come with a 16 MP primary camera