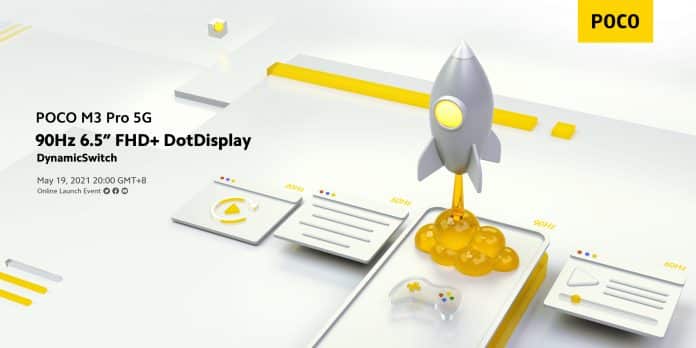 POCO M3 Pro 5G is launching on 19th May globally. The company had confirmed the launch a couple of days back. Now we have also seen the leaked renders of the smartphone. The smartphone is said to be the rebranded version of the Redmi Note 10 Pro 5G for the global market but will have a different design. This explains why the renders we saw seems different than the actual Redmi Note 10 Pro 5G.

Today the company had revealed that the phone will feature a 6.5-inch FHD+ display with a 90Hz refresh rate. POCO has also mentioned the name ‘DotDisplay’ which simply means that it will have a punch-hole display. This can also be seen from the last renders.

Few key specifications of the smartphone have been revealed, among which the phone is expected to have a 6.5″ FHD+ LCD with a 90Hz refresh rate. There will be a triple rear camera setup with 48 MP + 2MP +2MP sensors at the back and an 8MP front camera. We will get Dimensity 700 chipset and a 5000mAh battery supported by only an 18W fast charger.

The company has not revealed any other official specifications of the phone, but we are expecting some more details will be shared ahead of the launch. Though we already know that this smartphone will pack in the MediaTek Dimensity 700 chipset and an unique design paired with its own new POCO UI out of the box.