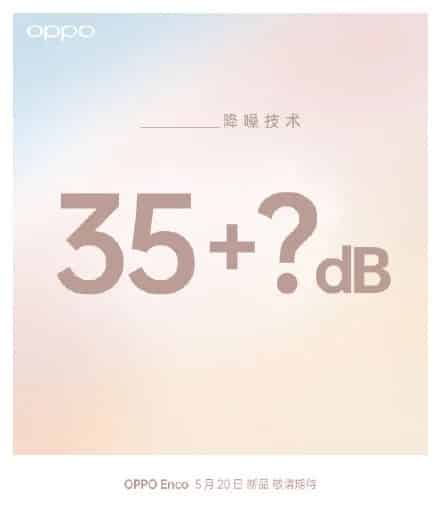 Oppo has already released a series of TWS and audio products in the market. It looks like Oppo is not going to stop anytime quickly and yet another TWS is said to be in development and the brands are planning to launch it soon in the home country. In the latest advancement, the company has released a teaser image of the upcoming OPPO Enco TWS disclosing the device’s launch date. Let’s have a closer look at the launch details of the forthcoming OPPO Enco TWS.

OPPO Enco TWS will going to launch on May 20

The latest teaser shared by the company on its Weibo account confirms that the upcoming Oppo Enco true wireless earphones are going to launch on May 20, 2021. The teaser also confirmed that the audio device will arrive with the Active Noise Cancellation feature making it more premium for the users.

The poster image shows that the ANC feature on the upcoming will support over 35dB similar to the Apple AirPods Pro. The teaser image shows 35+?dB which means the company is asking the viewers to take a wild guess about the noise reduction. Meanwhile, it also confirms that the TWS would be higher than 35dB. It seems that Oppo’s upcoming TWS is going to pit against premium true wireless earphones.

Xiaomi has recently launched its latest TWS with Active Noise Cancellation called the Xiaomi FlipBuds Pro. The newly launched TWS comes with 40dB noise reduction and launched with a price tag of CYN 799 (approx Rs 9,100) and the audio device is all set to go on sale from May 21st in the country. It would be interesting to see at what price Oppo is going to launch the TWS in China and how the devices are going to compete against each other.

Also do note that Oppo is yet to reveal the name or specifications of the upcoming TWS. We can expect more information about the upcoming TWS as we move closer to the launch.