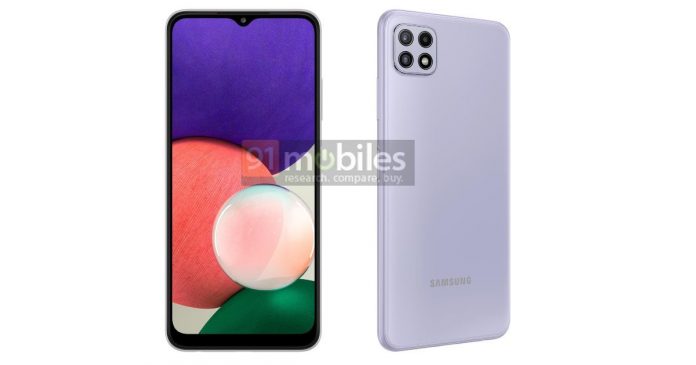 The rumors of specifications of the upcoming Samsung Galaxy A22 in a 5G and 4G variant have been in circulation for the past couple of months.

From the leaked renders we get to see that the Galaxy A22 comes with a waterdrop notch design on the front. An interesting observation was that the 5G variant of the Galaxy A22 is slightly thicker than the 4G variant.

The Galaxy A22 does come with fingerprint sensors but the location of the sensors seems to vary between the 5G and 4G variants. The 4G variant appears to have an AMOLED panel whereas the 5G variant will have an LCD screen with the fingerprint sensor placed on the side panel.

When it comes to the specs, so far we suspect that the Galaxy A22 4G will come with a 6.4″ AMOLED HD+ panel with a 60Hz refresh rate. The quad-camera setup comprises of 48MP+5MP+2MP+2MP combination. The front camera is a 13MP setup. The 4G variant will be powered by the MediaTek Helio G80 chipset. It comes with an amazing 5000 mAh battery and will be fast charging supported with a 15W charger.

The 5G variant of the Galaxy A22 will come with a 6.4″ FHD +LCD display. It is powered by the MediaTek Dimensity 700 chipset and features a triple camera setup comprised of 48MP+5MP+2MP configuration. It will have a 5000mAh battery as well along with a fast charger of 15W.

It is interesting to see how Samsung has actually differentiated the 4G and 5G variants performance and specs-wise. In most cases, the brands tend to keep the specs as similar as possible between their 4G and 5G variants but even though both the devices carry the same Galaxy A22 tag, they seem to be 2 different models by themselves!