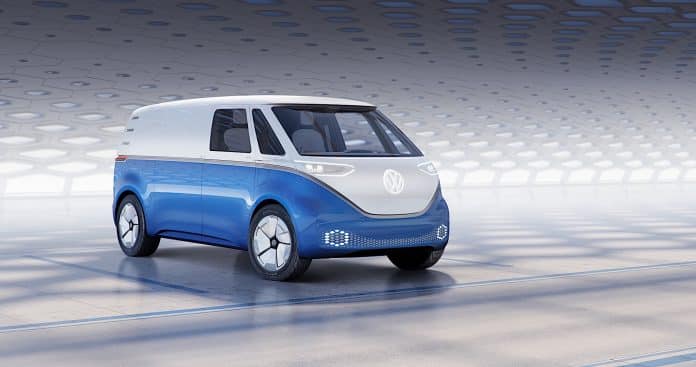 Volkswagen AG plans to revive the hippie-era microbus in a highly automated version as an electric van. The carmaker is offering the EV as it commercializes self-driving technology along with startup Argo AI.

Volkswagen is preparing an ID.Buzz with Level 4 autonomy to be ready for commercial transport of people and goods for 2025. Level 4 autonomy means that the vehicle can drive itself under certain conditions. VW is testing Argo AI’s technology at six U.S. locations and to further refine the system, it will expand to a site in Munich this year.

The ultimate development focus will be on densely populated urban areas that pose “high complexity for the technology, but also offer the basis for intensive use of mobility offerings,” said Christian Senger, the head of autonomous driving at VW’s van unit, according to Bloomberg.

VW and fellow Argo backing American automaker, Ford Motor Co., are trying to catch up to leaders of self-driving technology such as Waymo LLC that has proven the tech to be extremely expensive and challenging to bring to market safely. General Motors Co.’s self-driving unit Cruise backed off plans to deploy robotaxis while Uber Technologies Inc. and Lyft Inc. each reached deals in recent months to sell their driverless divisions.

Even Waymo’s technology has been subject to limitations as its service to offer van rides with no humans behind the wheel is confined to suburbs in the Phoenix area.

VW stepped up its efforts in the space when it invested in and teamed with Argo in 2019 and put its van unit in charge of the collaboration, as it’s betting self-driving technology can be rolled out for commercial use in designated areas faster than with passenger cars on public roads.

“We’re the leader in urban autonomy,” said Bryan Salesky, Argo’s chief executive officer and co-founder. “We are going where the demand is, where there is a great business to be built.”

Europe’s largest automaker’s efforts to develop robotic cars date back more than a decade ago to tests hosted by the U.S. Defense Advanced Research Projects Agency, or DARPA. But according to Bloomberg, “the industrial giant’s sprawling corporate structure comprising a dozen brands contributed to fragmented development that allowed quicker rivals to take the lead.”

Ford plans to roll out robotaxis and driverless delivery pods in multiple U.S. cities next year while Argo last week unveiled its own lidar it says is capable of seeing 400 meters down the road in the dark, about 100 meters beyond current state-of-the-art sensors. According to Bloomberg’s sources, Argo is considering a public listing as soon as this year.