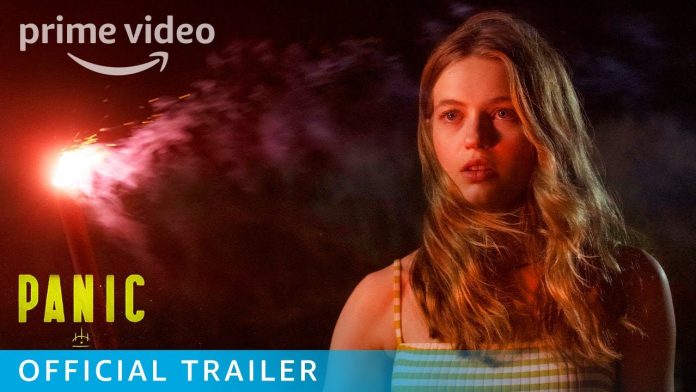 At last, Amazon Prime Video has released the official trailer of the incredible web series Panic. This web series contains ten episodes. It will reveal the service in over 240 countries and also the territories worldwide.

This trailer will give a sneak peek at the strange high-stakes challenges; it also includes teen friendships and romance; it has a never-before-release song, “Not Going Home”, in the tones of a global superstar and me. It is a pop song that will also be heard in the series in episode 109.

It is a one-hour-long series, this young adult series is written and also created by Lauren Oliver. The plot of this series takes place in a small town in Texas. It is a town where the graduating seniors compete in a series of challenges every summer, all the winners take all the challenges. They believe that this competition is their one and only opportunity to overcome their circumstances and keep their life better.

In this year they have made some changes in their rule. This time the amount of money bigger than ever; if you think it is easy to get, you are wrong; this time, the game is also more dangerous than before. It is a strange game because in this game, the players will face their strongest, deepest, and darkest fears and have to decide how long they are willing to take the risk to win this game.

Jessica Sula is performing the role of Natalie. Natalie desires to move to California and fulfil the dream of her mother to become an actress.

Mike Faist is performing the role of Dodge Mason. He is a new child in the town and floated along invisibly along the senior year at the high school.

Ray Nicholson is playing the role of Ray Hanrahan. He belongs from a long line of criminals and trailer trash, and he is happy more than the bearer of the public of that great heritage.

Cameron Jones is playing the role of Bishop. He is a gentle kid. He is very affable, funny, sweet, and an all-around athlete. He wants to fulfil all the expectations of his community and also his father.

Enrique Murciano is playing the role of Sheriff Kean. He is a person who wears his office mantle heavily. He is haunted by loss and aligned to his grieving wife and control over one thing that she can focus on single-mindedly.

Moira Kelly is playing the role of Laura Kean. She is the wife of Sheriff Kean. She is very disappointed after the death of her son, Laura Kean, who is locked in the past.

Nancy McKeon is playing the role of Jessica Mason. She is a single mom. She is wonderful, fierce, and also a fighter. She is very caring to her two children more than anything and uprooted the family’s life for the justice of her daughter.

Rachel Bay Jones is playing the role of Sherri Nill. She is a single mother at the age of seventeen. She is very roughed by life and seeking refuge in the wrong places such as booze, drugs, and bad men. She loves her all children but does not know how to care for them.

The series will be premiering on 28th May Friday. It is expected we will experience a web series with a unique story this year.