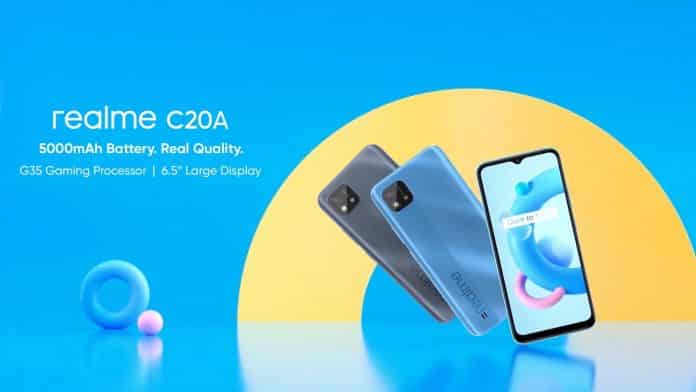 Realme, the Chinese smartphone manufacturer, has launched its new device Realme C20A in Bangladesh today. The new phone is basically a rebranded version of the Realme C20, which was released in January. The same smartphone was launched in the Indian market last month.

Realme C20A sports a 6.5-inch HD+ IPS display and comes with a screen resolution of 720 x 1,600 pixels with a 20:9 aspect ratio. It has a screen-to-body ratio of 89.5%. The device is powered by the octa-core MediaTek Helio G35 mobile processor and runs on Android 10 out of the box. It possesses a Geometric Art Design which can attract customers and has 3-Card Slot.

The smartphone houses a powerful 5,000 mAh battery cell and is paired with supports reverse charging. Connectivity features include dual-SIM support, 4G VoLTE, Wi-Fi 802.11 b/g/n/ac, Bluetooth 5.0, GPS/A-GPS, a 3.5mm audio jack, and a micro USB port. The device weighs 190 grams and the dimensions are 165.2 x 76.4 x 8.9 mm. The handset comes in Iron Grey and Lake Blue colour options. The device is priced at around BDT 8,990 or approximately Rs 7,755 in Bangladesh.