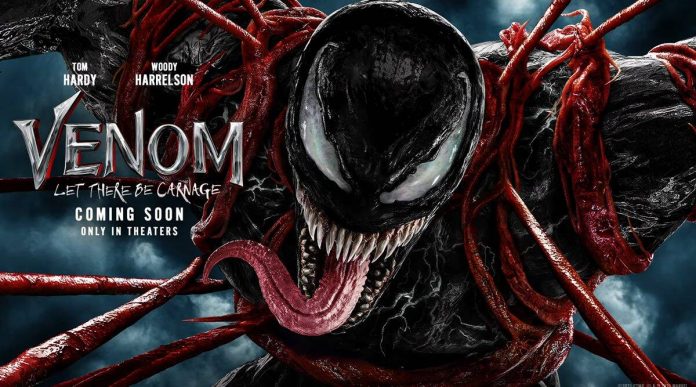 At last, the first trailer of Venom: Let There Be Carnage has been released. It is expected that the film will be released later this year, but all the things are obvious on the development front of late. The sequel of Venom is just four months away, Sony pictures reveal the first trailer of the film that looks very funny, and it shows some funny activity of that creature.

We have heard many rumours about the contrary, but there is not any principal superhero cameo in the teaser trailer of Venom 2. It has also suggested that Tom Holland’s Spider-Man would be present in the footage, but it does not prove anything beyond that.

We can get the first look at the film at Woody Harrelson’s Cletus Kasady and his alternative supervillain Carnage; we have already got a glimpse at Naomi Harris Shriek. In this sequel, both the characters would be the antagonist of Tom Hardy’s Venom.

The arrival of the video was the first time reveals by the Twitter account user Amit Chaudhari. The Arena VFX Animation artist, the person who also exposes the internal information on Marvel, Disney, and Sony superhero productions, also provides some hints about the first look of the movie’s villain in the trailer.

In this film, we will see Woody Harrelson will play Carnage, but Chaudhari did not properly depict the trailer exactly where the appearance occurred. The tweet of Amit Chaudhari rapidly followed up from one of the leakers, Daniel RPK.

He has a middling track record of the correct leaked information, so it is better to skip it. The other Twitter users included with the Marvel Latin News Twitter account have also been got official merchandise on the website of shopDisney.

It is also informed that the Venom: Let There Be Carnage t-shirt is already available at the online Disney Store. All of this is pointed strictly to the marketing of this Venom film.

Spider-Man Cameo in Venom: Let There Be Carnage

It is going to be the biggest surprise about the trailer, the cameo of Spider-Man. Some Reddit users who have the subscription to Daniel RPK’s Patreon page also have revealed the appearance of Tom Holland.

It seems impossible to do with the MCU Phase 4 specifically to Spider-Man: No Way Home. It has already been reported that the third MCU Spider-Man movie will be an incredible Spider-Verse crossover event which is included multiple villains, and also with some live-action Spider-Man set will appear in the film.

It is expected t5hat Doc Ock and Electro also will appear from the previous Spider-Man film adaptations, is due to the breakdown of MCU, which apparently reveal little different realities collide and also comes with various Spider-Man incarnations and strong enemies to bleed on it and if we are not wrong it is already hinted slightly at the Spider-Man: far From Home in the mid-credits scene, it was a cameo appearance from J.K. Simmon’s J. Jonah Jameson had been exactly appeared in Tobey Maguire’s Spider-Man trilogy.

It is still not clear about the role of appearing of Tom Holland’s Spider-Man in Venom 2. It may be for the breakdown of the realities, and Marvel Studios and Disney have set up many for Phase 4.

If all the other realities are hit with the MCU for the Avengers: Endgame, then obviously it could be the reason for the thrust into the Spider-Man, Spider-Verse. It is also assuming that Tom Holland’s Peter Parker may end up permanently in Spider-Man Spider-Verse based on the events of No Way Home that would be the setup of the cameo of Venom 2.

This Venom sequel will release before No Way Home, so it seems as Holland’s web-slinger may appear in Venom 2, it may be only for a minute or two like a funny cameo.

It is still unknown how much of Doc Ock and Electro have made all their way in the MCU. If they are travelling through a portal of some sort, it seems that Holland’s Spider-Man accidentally will befall via one of the interdimensional doorways and watch himself in Venom adaptations.

It may take some moments to feel that he belongs from the Difference universe. It has been seen that Venom and carnage will be battling with each other and decide to go back through the portal that he has arrived.

It is expected that it will be a humorous cameo, if nothing else then it may prove Daniel RPK’s Spider-Man rumor to be real. It seems that we would not have to wait for much to watch if this is true or not.

Venom: Let There Be Carnage is expected to release on 24th September. After watching the trailer there is no doubt that the film will create a huge response among the viewers.

The E3 2021 Showcase for Microsoft was the Most Viewed in Its History, Though It is Standing Behind Nintendo’s Record

The Effect of Disney on Subscription Video On Demand Market