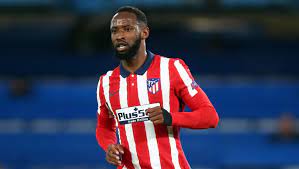 Arsenal is considering a move for Lyon striker Moussa Dembele this summer.

Arsenal has had a disastrous season this year as they are almost certainly out from the next year’s European competitions. The Gunners are planning an overhaul their squad before the next season.

According to the Telegraph, Moussa Dembele, who is currently playing on loan at Atletico Madrid, is one of the prime targets for the English side. It is reported that he could be available for just £25million.

Atletico Madrid has an option to buy the Frenchman for around £30m this summer. But after a tough season at the Spanish capital Diego Simeone will surely not want to spend money on him.

Dembele has faced fitness issues throughout the seasons. He has featured in just 6 matches in all competitions this season and hasn’t found the net till now.

But Arsenal is well aware of Dembele’s potential. The Frenchman netted 51 times in 94 matches for Scottish giants Celtic while also bagging 45 goals in 108 games for Lyon – where his contract expires in the summer of 2023.

As Lacazette and Nkeitah’s future at London have become uncertain, the Gunners are already in search of a new replacement and Dembele is one of the prime option in this regard.