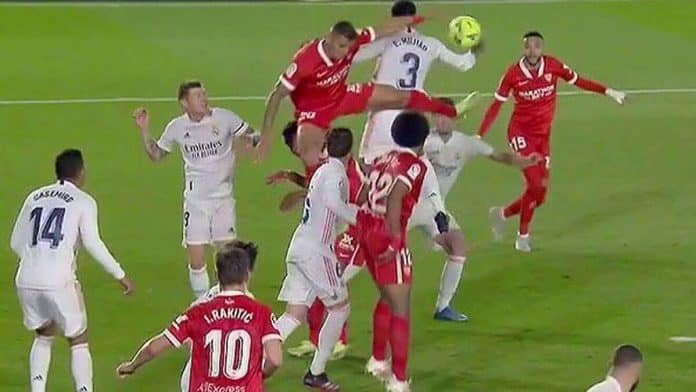 Real Madrid drew 2-2 with Sevilla yesterday in LaLiga, following an injury-time equaliser from Toni Kroos that was deflected by Eden Hazard, and to whom the goal was eventually awarded. Los Blancos had the chance to go to the top of the table, but currently find themselves two points behind their rivals Atletico.

Barcelona drew with Atletico in their encounter on Saturday, which gave Zinedine Zidane’s men the perfect opportunity to capitalise. However, things did not go according to plan for them. And neither did the referee’s decisions.

Madrid had an early goal disallowed for offside, and that allowed Sevilla to officially take the lead following a goal from Fernando, assisted by Ivan Rakitic.

Karim Benzema was haggled down by Bono in the penalty area, but the penalty was not given despite a VAR check. That was further topped by what happened at the other end of the pitch. Eder Militao handled the ball following a corner, that gave the visitors a penalty instead.

Ivan Rakitic converted the penalty to give Sevilla the lead. However, in the 93rd minute, Toni Kroos’ shot from outside the box took a huge deflection via Eden Hazard’s foot and beat Bono to level things up.

Zinedine Zidane was furious with the officials and their decisions during the match, calling for the handball rule to be explained to him in the post-match press conference due to the confusing nature of the referee’s calls.

Barcelona and Real are both level on points, with 75 apiece while Atletico lead with 77. With three games to go in the league, the title is still anybody’s to call. However, that is only possible if Diego Simeone’s men do not win their three remaining matches. If they do so, they will be crowned champions of Spain for the first time since 2014.