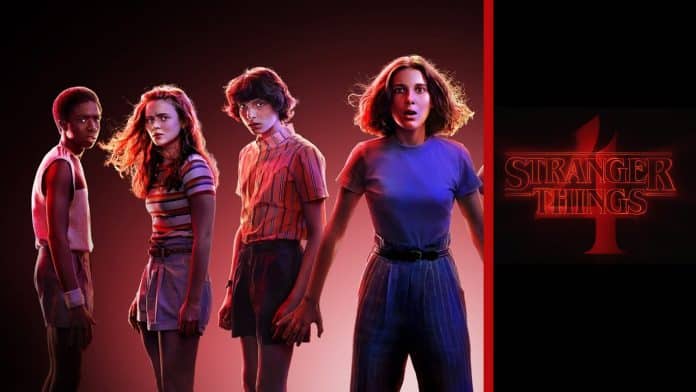 The most popular series Stranger Things is coming back for the fourth season on Netflix and it seems that it will arrive on Netflix in 2022. The production of the series is still running and yet to wrap. There is no introduction need for this biggest flagship show that was first arrived on Netflix in July 2016.

After teasing about few days, it was leading up to 30th September 2019. Netflix currently confirmed that Stranger Things is going to return for a fourth season. As Netflix has signed a multi-year deal with The Duffer Brothers. It is one of the top deals of Netflix with Shawn Levy who is the producer of this series. After the date has thrown about 2021, it is expected that season 4 will arrive this year. But Finn Wolfhard signaled that the series hopefully will return in the next year means 2022.

‘Season 4’ is the Final Season or not

It is very difficult today the season 4 will be the last season or not. Shawn Levy said that they have a good sense of stuff that happens in season 4. He ensured that season 4 would definitely happen. He also ensured that there is a very much possibility of a season beyond it that is not decided though. He exposed that in this chaos and the fun while The Duffers and the writer’s room and the Producers outline the whole season, the Duffers are using t revisits to the process.

As they always were start off with a good sense of principal arcs of the season. They would be ready for shifts and also the surprises due to the stumble of the Duffers into a different and surprising inspiration as they started to rewrite the script.

The fourth season is contained with eight episodes just as the first and the third season. However, from the writer’s room, there are nine scripts are present. On 7th November, the writers of the Stranger Things announced on the Twitter accounts about the first episode of the series and also the writers.

Episode 401: “Chapter One: The Hellfire Club”- written by The Duffer Brothers

As Hopper’s Body has not seen disintegrated by the outburst of power from the Russian’s machine but assumed for the worst. It seems that Hopper must have used the opening of the world created by the machine to jump from Hawkins to Kamchatka and ended up being caught by Russians. There is only chance to escape is if Hopper could use the machine and return his journey to the USA. It is suspect that pet Demogorgon which is held by the Russians might be the part of the Hopper’s escape.

The Byers and Eleven will return Hawkins

After bidding goodbye to their friends and Hawkins, the Byers and Eleven move to pastures new. Eleven have cleared that they will talk and visits soon as they can. Mike will visit the Byers for giving Thanks, Joyce will be asked if she can stay with Mike for Christmas. It is expected that the next season will be based on Christmas. The return of Jonathan to Hawkins would be cross their relationship with Nancy Wheeler.

If you think that the Mindflayer was destroyed then you are doing a mistake. We have seen the creatures throughout the entire season three which was a conduit use of a Mindflayer. After their world shut the connection between the Upside Down becomes lost the signal and thus the body was destroyed.

Now Mindflayer is safe and sounds cool in the Upside Down but is trapped. It is expected that he will definitely come back with a vengeance and look for revenge on the towns of Hawkins after thwarted twice. The returning process will be very interesting.

It is assumed that the big exposer at the ending of the fourth season was shown to be the capturing of Demogorgon by the Russians. At first, the Russians had found a Demo dog until its hind legs revealing the true form of the creature.

It is still in a fog about how they will capture a Demogorgon but it is expected that they will find one of the similar spawns to Austin’s pet D’Artagnan in the second season.

One thing is clear from Dustin’s connection with D’Artagnan that the creatures from Upside Down can make bonds, no matter how much small it is. If the Russians rear the exact Demogorgon since the birth they were able to tame the monster. Russians study the creature and reveal that Demogorgon likes to feed regularly and they possess the ability to go in and out of the Upside Down.

Here is the teaser trailer of the series:

“The Family Man (Season 2)”: Amazon Prime Video has released the trailer and announced the Release Date