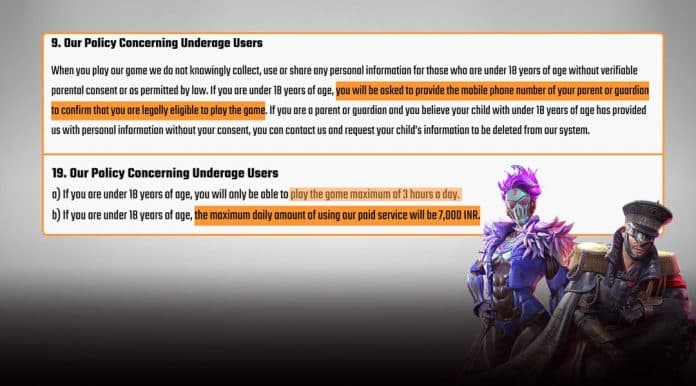 The long wait for PUBG’s return to India will soon be over! Recent updates from Krafton have confirmed that the game will be renamed ‘BATTLEGROUNDS MOBILE INDIA‘ and will be available only for players in India.

Apart from the updated name, Krafton has gone ahead and updated its User terms and policies. This move by Krafton will be welcomed as they require users under the age of 18 to provide the phone numbers of their parents/guardians in order to confirm that they are legally eligible to play. Krafton has capped the duration of every user to 3 hours per day, if they exceed the said duration, the user will be unable to access Battlegrounds Mobile India for the remainder of the day.

They have also restricted the amount minors will be able to spend while making in-game purchases to 7000 INR per day.

When it comes to the game itself, Krafton has revealed that Battlegrounds Mobile India will have a battle royale experience, the game will feature various events that will be exclusive to India which are yet to be revealed. Battlegrounds Mobile India will have a period of pre-registration before the official launch of the game.

Krafton has clarified that all the information that it collects and stores will be in compliance with the laws and regulations in place. They have worked towards making sure they follow the government’s directives as they were one of the 117 mobile games that were banned by the Government of India last year due to their affiliations with China.

Subsequently, Krafton acquired the rights to PUBG from its Shenzen-based entity and has made plans to localize its Indian data and set up a dedicated team of 100 personnel at least.

With the rise in Coronavirus cases and the return of lockdowns, Battlegrounds Mobile India is a welcome move!