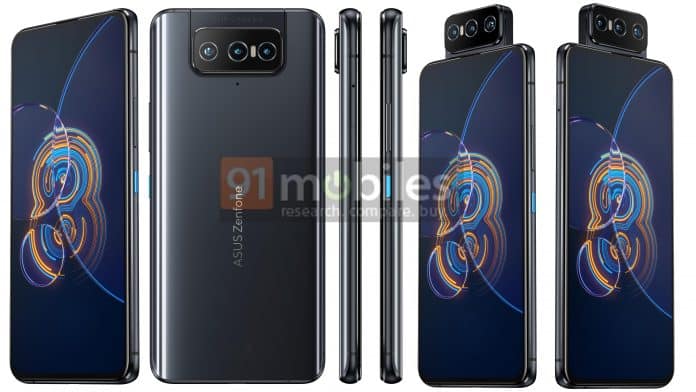 The ASUS ZenFone 8 is a smaller model with a 5.92-inch FHD+ display. It gets the Snapdragon 888 chipset coupled with 8GB RAM and 128GB internal storage. There is a dual rear camera system featuring a 64MP primary sensor and a 12MP macro lens, which also supports 8K video recording. As it is a small smartphone, the ZenFone 8 houses a 4,000mAh battery and also supports 30W fast charging. The device measures 148×68.5x9mm and weighs just 170 grams.

The design of the ASUS ZenFone 8 Flip is similar to its predecessor. The phone has a edge to edge display at the front and no notch and punch hole cut because the rear camera module flips 180-degrees to become a selfie camera when required. From the design it looks pretty basic and there is no more information available right now.

ASUS ZenFone 8 Flip is expected to include a 6.67-inch FHD+ AMOLED display with a 90Hz refresh rate. The phone will be powered by the Qualcomm Snapdragon 888 chipset paired with 8GB RAM and 256GB internal storage. The device will be powered by a 5,000mAh battery and supports 30W fast charging. The motorized camera module houses a triple camera setup including a 64MP main sensor, an 8MP telephoto lens, and a 12MP macro lens, which also supports 8K video recording. The handset measures 165×77.3×9.5mm and weighs 230 grams due to the camera mechanism and battery.