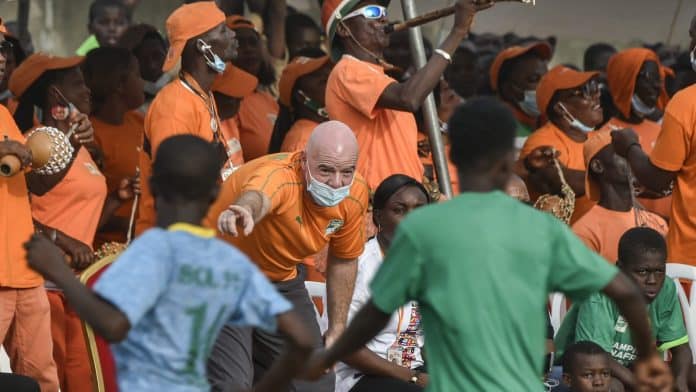 The presidents of CAF and FIFA travelled to Côte d’Ivoire on Monday as part of their first joint mission in Africa since the election of Dr Patrice Motsepe as the confederation’s new president in March. Central to their two-day itinerary were meetings with government and football officials, with the focus on promoting unity and serenity, developing and strengthening the country’s football governance and launching the continent’s inaugural pan-African inter-school football championship in Abobo, a municipality just outside the country’s capital Abidjan.

Arriving in Abidjan they were greeted by members of the normalisation committee of the Ivorian Football Federation (FIF), including President Mariam Dao Gabala, who along with her colleagues has been responsible for bringing football back into play in Côte d’Ivoire.

An official dinner was hosted for the delegation by Ivorian Minister for the Promotion of Youth, Professional Integration and Civic Service, Mamadou Touré, in the presence of Minister for National Education and Literacy, Marietou Koné. Addressing the gathering CAF President Dr Motsepe underlined the unifying power of football being more important than differences between diverse groups of people. He was also keen to highlight CAF’s robust support for the West African nation stating: “Côte d’Ivoire has CAF’s total commitment and 2023’s AFCON here will be the best ever.”

FIFA President Gianni Infantino bolstered this message further saying: “We need to work together to make football great and make the millions of passionate fans in Côte d’Ivoire, a country that has won the AFCON twice and will soon host it, happy.”

Present at the event to provide their support for the joint CAF/FIFA mission were CAF’s four vice presidents, presidents of the five CAF zonal unions and presidents from CAF Member Associations in West Africa Football Zone Union B.

This morning, the CAF and FIFA delegation’s focus was on viewing the work of the FIF normalisation ccommittee first hand, in order to understand what had been completed and the challenges it has faced. Addressing the assembled media outside the FIF building Dr Motsepe congratulated President Gabala and her team on their outstanding work and strong commitment to bringing peace and unity back to Ivorian football.

This sentiment was echoed by FIFA President Infantino who underlined the progress the FIF had made, particularly with the organisation of an elective congress, which it hopes to hold by the end of the year. “Côte d’Ivoire has the unwavering support of FIFA,” he said.

The joint delegation then travelled to the Ministry of Sports for a meeting with Minister Claude Paulin Danho. Discussions covered the country’s hosting of next year’s AFCON competition, and improving football governance. Speaking to the minister, Infantino expressed FIFA’s commitment and willingness to work hand in hand with the Ivorian authorities to “reinvigorate Ivorian football, especially given the outstanding talent it has produced. The football legends from Côte d’Ivoire have greatly contributed to building football history in Africa and across the world,” he said.

Ivorian Legends were very much pivotal to talks amongst the three men, with the CAF president reminiscing with Minister Danho about Siaka Tiéné, a young Ivorian player who had been one of his favourites due to his talent and passion, when Dr Motsepe ran South African football club Mamelodi Sundowns, prior to his election as CAF president.

The delegation were then received by the President of Côte d’Ivoire, His Excellency Alassane Ouattara, at the Presidential Palace. During the meeting the joint delegation stressed the outstanding talent in the country and the need to harness this through the development of youth football and CAF’s first ever pan-African inter-school football championship.

Following the discussions with the Ivorian Head of State, Infantino said: “President Ouattara is a great fan of football, so it is an honour to be here today to talk about how we can work together to support the youth of this country through the beautiful game. Côte d’Ivoire is a county with a legacy of talented footballers and many future ones yet to be discovered, so it is important for Africa and the rest of the footballing world that FIFA, CAF and the Ivorian authorities work together to develop the game and elevate it to the highest of heights.”

The final engagement of the day for the CAF/FIFA joint delegation was the launch of the pan-African inter-school football championship in Abobo. Fittingly, a football match featuring mixed teams of schoolchildren kicked off the initiative, with both presidents putting their technical and tactical football skills to the test as team coaches.

Following the match Dr Motsepe announced that the Motsepe Foundation, founded by himself and his wife Precious Moloi-Motsepe, would make a donation of USD $10 million to the ground-breaking new pan-African inter-school football championship, which will take place across the six zonal regions of CAF. After the match, the FIFA President said: “The gesture from the Motsepe Foundation, Patrice and his wife Precious, is exceptional. It’s a step forward for this competition that will give hope and joy to thousands of children in Côte d’Ivoire and throughout Africa who love football. Thank you to the Motsepe family for showing us Ubuntu in action.”

The joint delegation ended their visit to Côte d’Ivoire with a press conference focused on the African league, the development of women’s football, strengthening football governance, this November’s FIFA Arab Cup in Qatar and how to bridge divisions in Ivorian football. Both the CAF and FIFA presidents also outlined the plans to roll out the inaugural pan-African inter-school championship in Côte d’Ivoire to the assembled Ivorian and African media.

Share
Facebook
Twitter
Pinterest
WhatsApp
Linkedin
Previous articlePep Guardiola’s reaction to Manchester City reaching their first-ever Champions League final
Next articleFIFA 21 – TOTS: How to do the Saudi Pro League TOTS Guaranteed pack and what do you get from it?