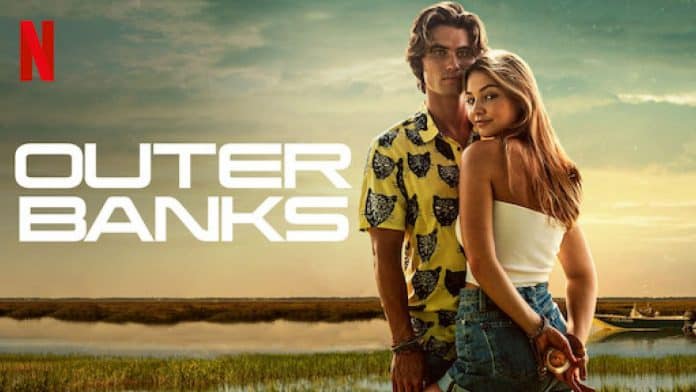 Netflix will release season 2 of Outer Banks as the shooting of the series has been wrapped up. It is an upcoming action crime drama included with Chase Stokes, Madelyn Cline, and Madison Bailey.

Renewal of Season 2 on Netflix

After the four months of its first April 2020 release date, finally, Netflix has declared about the return of Outer Banks second season. Later, Netflix added many images with some of the cast members, and a video was also shortly released.

A Reddit AMA with a group of members of the show has revealed some optimism about the second season’s release, about 95%. After three days, it has been stated that the series had been renewed on 4th May 2020.

The production of the series continued along with the later parts of the year 2020, and the shooting has set to conclude in December 2020 reportedly. It is informed that season 2 of Outer Banks will be released in late 2021.

In the middle of April 2021, it was informed that Carlacia Grant will join in season 2. She will perform the role of Cleo. She is a Nassau girl with a formidable artful dodger, the world of the girl collapse with the Pogues.

There is some addition in the cast who are Jontavious Johnson as Stubb, Nick Lawrence as Deputy Collins, Shane Miclette as Matthew, and Elizabeth Mitchell has recently included for the cast of season 2.

There no official view has been shared for the series, but the performance of the series can be tracked well, a big thanks to the top 10 features of Netflix. FlixPatrol reveals that the series accursed 5321 points on its scale and the most popular 19th title in 2020.

In the USA, this series got a huge response from the audiences it holds in the top 10 positions for 50 days. It holds the position from 24th April to 28th April. It also has got IMDb score of 7.6 out of 10.

This series depicts a group of teenagers who have a treasure map that reveals the spot where $400 million of gold has been hidden that sunk with the help of a merchant ship. At last, all the relationships are strained and ended up stealing the treasure. In the season one ending, it has seen that John B was framed for the killing of Ward’s father.

John Pates exposed that there would be few episodes that take place, at least partially, in the Bahamas; it will reveal a bigger mystery. Al the old villains will be returned, and maybe some new ones would join them.

A new villain has been featured for season 2; Josh said that the Ward might not get justice necessarily, and fundamental new mysteries are waiting. There is some prediction that John B will find his mother; the hidden treasure will be finally discovered, J.J. will live with Kiara.

It is assumed that the narrator might be going to change in season 2.

Finally, the most important fact is in late December 2020, a North Carolina teacher and the author draw a lawsuit against Netflix for the copyright issue. There are no recent updates that have been published.