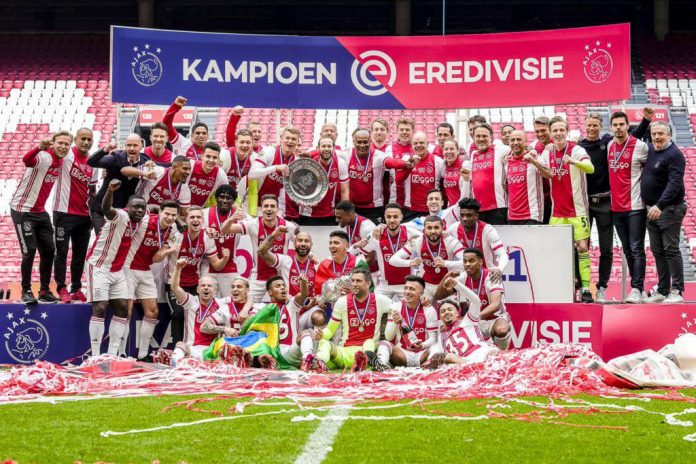 Ajax were crowned the champions of Netherlands for the 35th time in their history, after thrashing relegation candidates FC Emmen 4-0. Davy Klaasen, Devyne Rensch, Jurrien Timber and Sebastien Haller were both on target as the league leaders beat their opposition on the day.

Accumulating 79 points from 31, Ajax have also qualified for next season’s Champions League and outran title rivals PSV Eindhoven, who trail by 15 points with 4 games to play. Dusan Tadic leads the metrics for the most assists in the league with 16, and was one of the standout performers in yet another title winning campaign for Ajax.

Fans gathered in numbers outside the Johan Cruyff Arena to celebrate Ajax’s record extending victory, proving that few can compare to the passion that the fans of the club have.

The 19/20 season was called off following the coronavirus pandemic suspending play across the world. Hence, technically Ajax retain their title since nobody could’ve possibly won it last season. They were joint at the top of the table alongside AZ Alkmaar with 9 games to go till the end of the season.

The fans of the Amsterdam based club have even more reason to celebrate since head coach Erik ten Haag signed an extension till 2023 this week itself. He was linked with a switch to Tottenham by many, with the London club looking to replace Jose Mourinho.