“Alma Matters: Inside The IIT Dream”- A series that explores the Inner World of IIT 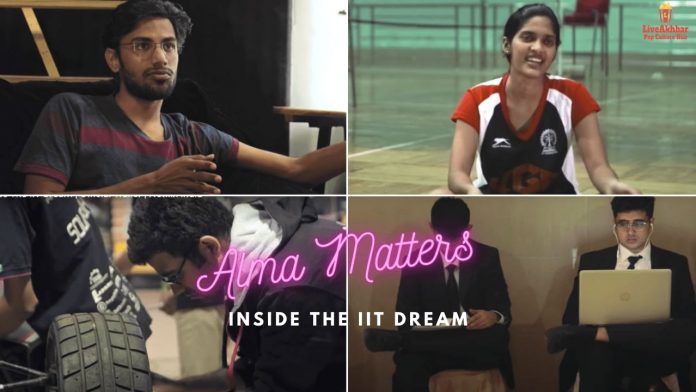 Alma Matters: Inside the IIT dream. It is a three-part web series. It is going to be an exciting series. We all know about IIT, everyone dreams to crack IIT for study. We all know about the bright, aspirational exterior of IIT Kharagpur but the light with despair, self-doubt, and other mental issues that the engineering students have faced inside the campus are not shared openly.

This upcoming Netflix series is going to explore all the internal matters in IIT. On Saturday the streamer revealed that the trailer of the documentary series which is a three minutes long clip has shown the students the meaning to be an IITian.

Alma Matters: Inside the IIT, the series is directed by Pratik Patra and Prashant Raj. The producer of this series is Dopamine Media & Entertainment Pvt Ltd, this web series aims to explore the inner world of IIT Kharagpur, an institute which is contained with overwhelming competitiveness, a lot of sexism, a battle for preserving identity, and also a strong spirit to overcome all the difficulties.

It has cleared from the highlights of the trailer that one might realize in an environment like IIT Kharagpur. It is a place where anyone would be detached from the realities of the outer world as the influence of the place itself looms on the mind of the people.

However, it is the same place that provides a sense of Bonhomie to its residents as friendship and comfort have been found in joys and sorrows. As the trailer proceeds, a big surprise comes to the end about the maverick comedian Biswa Kalyan Rath. He is an alumnus of IIT Kharagpur. The comedian has supplied a lot of pieces of comedy about his time he spent at IIT and also about some facts that build the actual engineer.