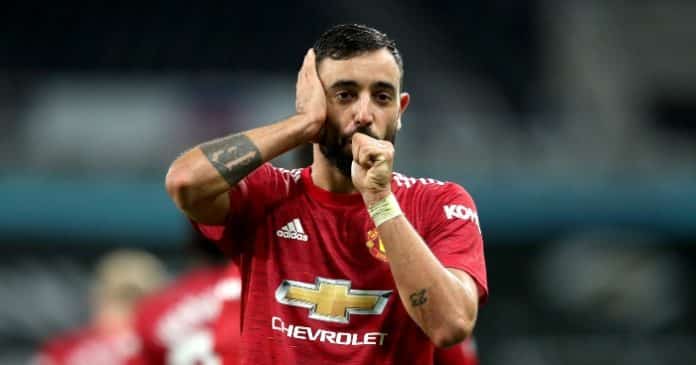 Bruno Fernandes is one of the players who have had the most impact after signing for Manchester United. He has now totally changed the United midfield and has brought energy, dynamism and positivity into the team.

The Portuguese international was involved with a Q$A session with Manchester United. It was a part of United’s exclusive fans’ Q&A conducted at the Aon Training Complex recently.

Bruno Fernandes was asked a question, which was submitted by Lebby in Tanzania on the subject, asking who he would like to manage if he went into coaching. The Portuguese provided a typically candid and honest response.

“I don’t know which team I would like to manage. Of course, the biggest team if I can manage Manchester United, I will be happy. I can leave now just some words so if people see this, if I’m a manager in the future, the fans can make some pressure to bring me as a coach!

“But I think I would like to be a coach in the future. I’m not sure but for what I feel for football, for the feeling I have, I think I have to continue to be inside of football because my whole life is about this. So I think, in the future, it needs to be with football too.”

Bruno Fernandes concluded by answering if he believes United can challenge for the Premier League title next season.

He said: “I think, honestly, the team has improved a lot since I arrived. I feel the improvement but I think the team is improving since the coach [Ole Gunnar Solskjaer] arrived. He’s trying to put his hand on the team and make it better and better.”