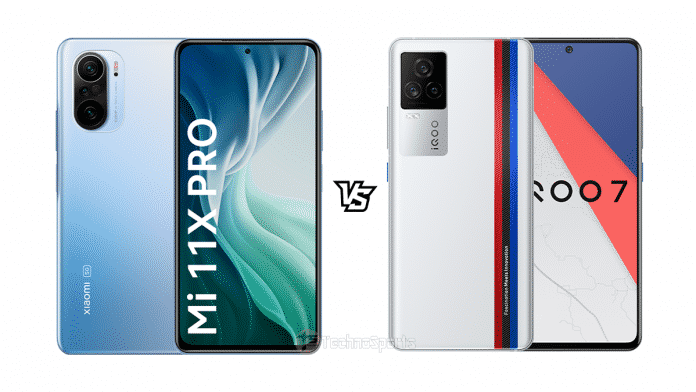 Mi and iQOO have new series in the market. Before this piece, we compared the two base variants of these new series and here we compare the high-end models which are Mi 11X Pro and iQOO 7 Legend.

In terms of optics, MI 11X Pro has a triple rear camera module including a 108 MP Samsung HM2 primary sensor, an 8 MP ultra-wid-angle lens, and a 5 MP macro sensor. For selfies and video chats, it offers a 20 MP snapper at the front.

On the other hand, the iQOO 7 Legend also boasts having a triple camera system at the back. This features a 48 MP primary sensor (with OIS), a 13 MP ultra-wide macro sensor, and a 13 MP portrait sensor. Here the front camera is of 16 MP lens.

The Mi 11X Pro phone has a fingerprint scanner on the side whereas the iQOO 7 Legend comes with an under-display fingerprint scanner. The length of the two smartphones are the same but the presence of a Super AMOLED against AMOLED gives display domain to iQOO7 Legend.

Talking about the camera, it’s a mixed battle. The primary camera and selfie snapper of MI 11X Pro are better but the macro and ultra-wide lens goes to iQOO 7. Overall, Mi 11X Pro takes the win here. The battery cell of the iQOO 7 is just a tad bit smaller but its fast charging support compensates for that loss. Our pick will be iQOO 7 Legend.