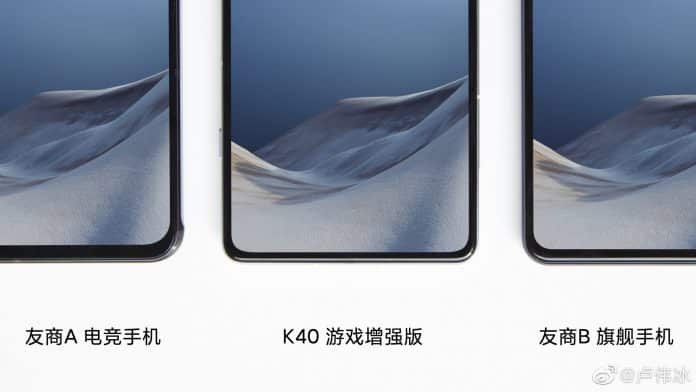 Redmi shows how thin the bezels of its upcoming Redmi K40 Game Enhanced Edition smartphone in a recent comparison photo of three phones including this one. In our previous article, we had given the measurements of the bezels of this smartphone and as claimed by Redmi, it is going to be the thinnest ring of bezels on each side ever on a gaming smartphone. The bezels are actually 1.8mm narrow on the three sides except for the chin, whereas, the chin will be just 2.7mm thin in this case.

The above image shows the Redmi K40 gaming phone in comparison with other gaming smartphones, and we can see how thin the bezels actually are.

As Redmi had already promised that it will provide the smallest notch in the Redmi K40 series, that also applied to this gaming smartphone as well. There is no news of collaboration or partnership for this upcoming Redmi K40 Game Enhanced Edition with any kinds of gaming brands. Initially, this smartphone is launching in China. Then later, according to some reports, this device will be relaunched in India under the POCO branding.

The Redmi K40 Game Enhanced Edition is now officially confirmed to have the MediaTek Dimensity 1200 chipset for professional-level gaming performance on a smartphone. The phone has displayed some amazing shoulder buttons that can be manually activated when needed. Along with all these, it will have one of the finest 6.67″ FHD+ OLED Display with a 480Hz three-Finger sampling rate including some other features as well.