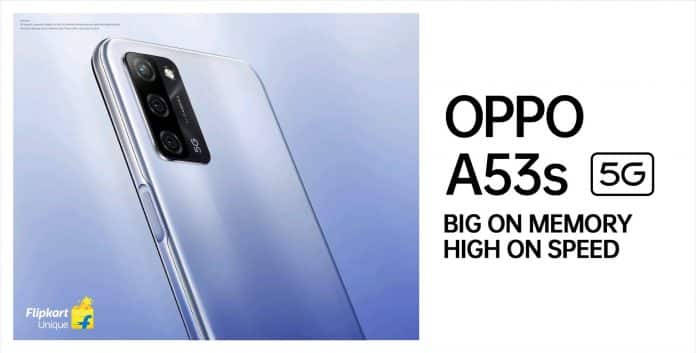 Oppo had launched the Oppo A74 5G in India with Snapdragon 480 on 20th April. The phone was a bit overpriced compared to some of the 5G devices already available in India. Now the company is planning to launch the Oppo A53s 5G smartphone in India. The launch of this device is scheduled for April 27th in India.

The phone will be available via Flipkart, and the live launch will start at 12 PM on that day. According to some of the Indian tipsters, this will be India’s cheapest 5G smartphone. According to them, the Oppo A53s 5G will be equipped with MediaTek 700 chipset. The company mentions “BIG ON MEMORY, HIGH ON SPEED” which also means a higher storage variant and powerful chipset. The official image of the smartphone that appeared on the poster shows a triple rear camera setup similar to the Oppo A75 5G.

Official specifications of this smartphone have not been revealed yet, so we are waiting for some official announcements ahead of launch. While the Oppo A74 5G had Snapdragon 480 SoC this smartphone is expected to come with a MediaTek Dimensity 700 chipset which is obviously powerful than the prior.