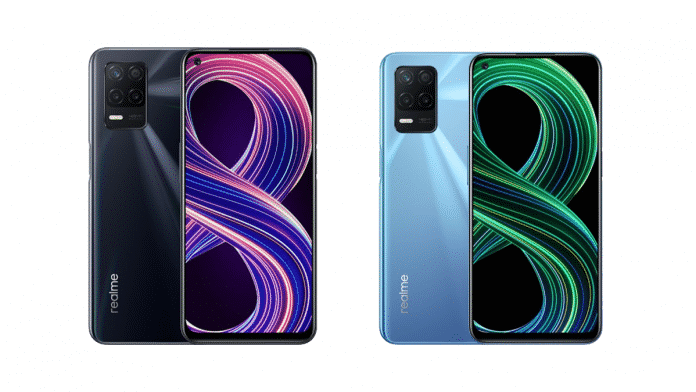 Realme finally launched the Realme 8 5G in Thailand yesterday and today the company will launch the same device in India as well. The Realme 8 5G is reported to be a mid-rang 5G device and is claimed to be the cheapest 5G smartphone of India after launch. The company had already launched the 4G versions of Realme 8 and Realme 8 Pro in Thailand and India last month. Let’s see what are the specifications, features offered and at what price.

Specifications and Features of Realme 8 5G

Realme 8 5G in Thailand features a 6.5″ FHD+ 90Hz LCD Display and as we all know the phone features a MediaTek Dimensity 700 5G chipset. The phone has a triple rear camera setup that includes a 48MP primary sensor along with two 2MP secondary sensors for depth and micro. The phone comes with a basic 16MP front-facing camera.

The phone runs on Realmi UI 2.0 and is based on Android 11. The phone is available in two types of storage options which are 4GB RAM + 64GB internal and similarly 6GB+128GB is another version. No, the interesting part is that the phone has LPDDR4X RAM support and also supports NFC. It has a massive 5000mAh battery which can be charged by an in-box 18W charger. The company likes to call it a fast charger but it takes more than an hour to fully charge this device with that power.

The phone weighs only 185g and is only 8.5mm thick. It has a side mounted fingerprint scanner on the power button and has the 3.5mm audio jack at the bottom of the device along with the USB Type C port and a speaker grill beside it.

The phone is priced at THB 9,999 which is approximately INR 24,000. This seems to be pretty costly for a smartphone that has Dimensity 700 chipset. In India, the company has already introduced the cheapest 5G smartphone with Dimensity 800U under Rs.17,000. So, it seems pretty confusing and we are thinking what will be the pricing of this smartphone in India.