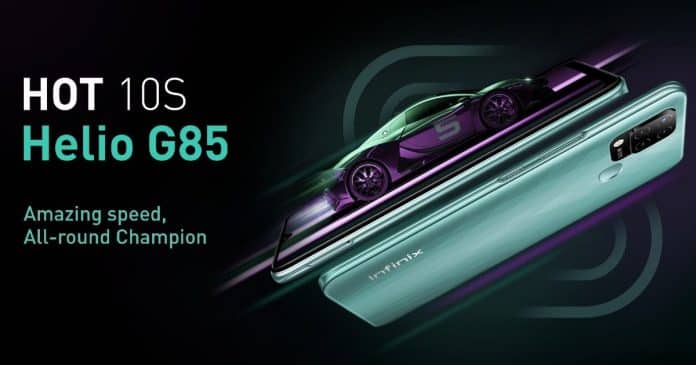 Infinix, the well-known smartphone manufacturer has expanded its portfolio in the market of Indonesia revealing two new smartphones in the Hot 10 series named – Infinix Hot 10S and Hot 10S NFC.

Both the devices have launched with almost the same specifications but the latter one is manufactured with an NFC chip, smaller battery, less storage, and others. The smartphone launches with some attractive features such as a 90Hz refresh rate, MediaTek G85, and many more. Let’s focus on the specifications, features, and also the price of the brand new Infinix Hot 10S and Hot 10S NFC.

The Infinix Hot 10S and Hot 10S NFC feature a 6.82-inch HD+ display with a resolution of 720 pixels. The smartphone also has a 90Hz refresh rate with the waterdrop notch at the design section to accommodate the sensor of the selfie camera. The company states that the Hot 10S series reveals with a Dar-link optimization engine software to supple a battery touch sensitivity.

The devices are powered by the MediaTek Hello G85 chipset and the company suggests that the GPU is 32 percent faster than the Snapdragon 665 SoC processor. As the company is very concern about the camera of this smartphone, the Infinix Hot 10S series provides a triple-rear camera setup with a mixture of a 48-megapixel primary camera sensor cooperated by a 2-megapixel depth sensor, it also has an AI camera with an LED flash. These handsets have an 8-megapixel camera sensor that is under the waterdrop notch for video calls and a selfie camera.

The Infinix Hot 10S and Hot 10S NFC are also powered by a massive 6,000 mAh and also 5,000mAh battery. The Hot 10S series is also launched with Dar-link Ultimate Game Booster for the comfortable gaming experience, it also has a rear-fingerprint scanner, and runs XOS 7.6 that is based on Android 11 OS.

The price tag of the Hot NFC version is USD 120 which is approximately Rs. 9,000 for the 4+128GB. The brand new Hot 10S series will be available for purchase with various options like 95 degree Black, Morandi Green, Heart of Ocean, and 7 degree Purple colour.

Previous article“Sardar Ka Grandson”: The Official trailer of the family Drama has been released
Next articleCenter Stage: How it can chage your Video Calling Experince on the new iPad Pro