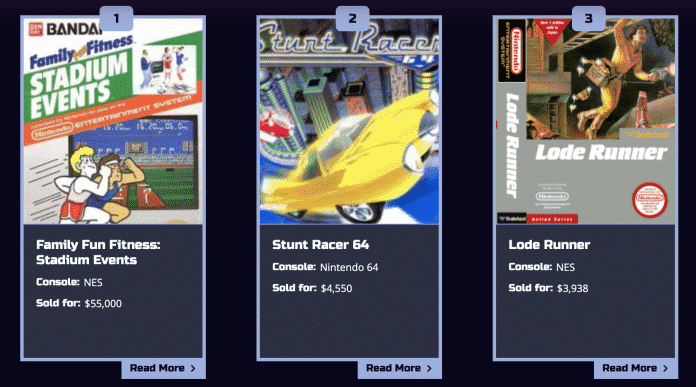 With gaming becoming a more popular pastime during the COVID-19 pandemic, some video games have seen a significant rise in value, so now might be a good time to look through your old video games to see if you have a fortune lying around.

Research conducted by Paxful looked at the value of the global resale market for second-hand video games during lockdown to find out which games have been sold for the most money during this time period.

Stunt Racer 64 is a classic racing game that was released only through Blockbuster stores. Original boxes and manuals were often thrown away, meaning intact copies of the original game are a very rare and valuable find.

One of the unique features of Lode Runner was its level editor, allowing gamers to create and play their own levels. The player controls the stick figure protagonist as he digs and climbs to collect gold and evade guards.

This game’s value is attributed to low production numbers by the developer company Taito. It’s a classic platformer that sold poorly up against bigger platform names on the NES.

This 2002 Game Boy Color game was outshined by the Game Boy Advance release the year before. Less than 25,000 copies of Shantae were rumored to have been made, so a sealed and unused copy is incredibly valuable today.

Known as Soleil in Europe, this game is often compared to the Zelda series. The storyline follows the protagonist, a boy called Corona, as he learns new skills in order to defend his town from monsters.

Castlevania II: Belmont’s Revenge was the second Game Boy release in the Castlevania series. The player has to battle through four mysterious castles to save the protagonist’s son from the evil grip of Dracula.

Players could brush up on their math skills with the help of Donkey Kong in this poorly received NES release. A cartridge with five instead of the much more common three screws on the back is very valuable to collectors.

This classic action game is very expensive these days, thanks to an unfounded rumor that it was a Blockbuster-exclusive release.

Spud’s Adventure is part of the Puzzle Boy series. The player takes control of a potato called Spud as he ascends a mysterious tower and takes on challenges.

* The price is the highest price that a game specifically sold for between January 2020 and January 2021.

Previous articleBREAKING: Atletico Madrid and Inter Milan becomes the latest clubs to withdraw from the European Super League
Next articleApple Card Family allows your Family Sharing group to use your credit card