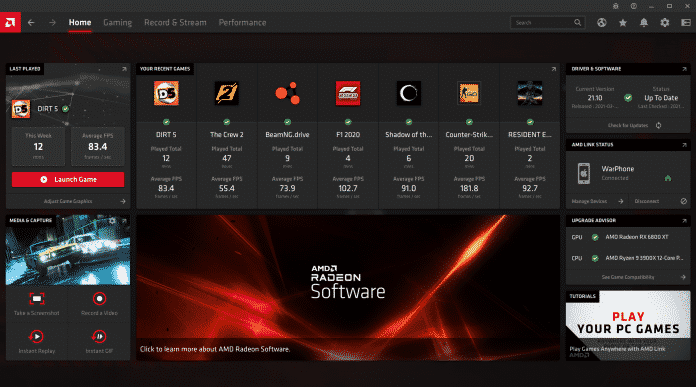 AMD has today announced their new major Radeon Software Adrenalin 21.4.1 update, the next edition of its software suite for AMD Radeon graphics, providing gamers, creators and enthusiasts with incredible visual fidelity, ultra-responsive gaming and advanced features to unlock the full potential of their AMD gaming experience.

This update is completely focused on gamers as it brings a handful of improvements and a lot of new features and customizations. It features AMD Link for Windows, allowing users to connect to their gaming PC from another Windows PC, as well as from a phone, tablet, or TV, to game from virtually anywhere.

It also provides an updated user interface with several usability enhancements requested by Radeon gamers, including customized installation options and simplified recording and streaming tools so users can easily capture and share their memorable gaming moments.

“Providing powerful hardware is only half of the equation to deliver the extraordinary, world-class AAA, esports, and multiplayer experiences gamers have come to expect,” said Frank Azor, chief architect of Gaming Solutions at AMD.

“With the new AMD Radeon Software release, our goal was to allow gamers to unlock the full potential of their AMD gaming systems, enabling them to fully immerse themselves in beautiful, hyper-realistic worlds, easily share their latest battles and victories, find new ways to game with friends and customize their gaming experience as they see fit.”

AMD Radeon Software is the gateway to unlock the full potential of the AMD gaming experience, designed to deliver responsive gaming, vivid visuals, and a complete experience for gamers.

AMD Radeon Software Adrenalin 21.4.1 can be downloaded today from the AMD Drivers and Support page.