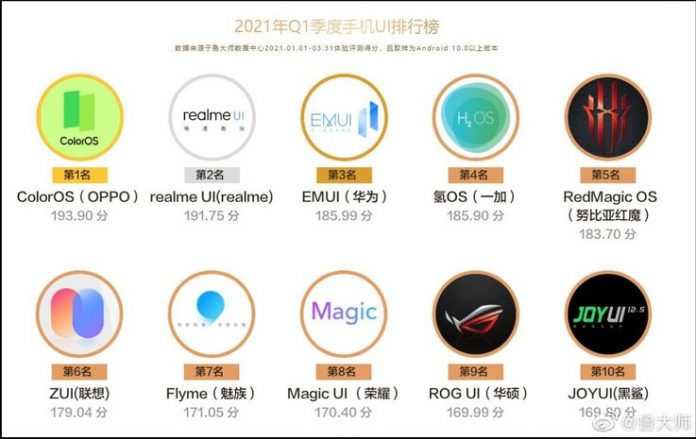 Master Lu, the highly-regarded Chinese benchmark, has announced its rankings of the best mobile phone user interfaces for the first quarter (Q1) of 2021. ColorOS, which is found on Oppo phones, is ranked the best user interface. It has a score of 193.90 points. The second position goes to Realme UI. It is followed by Huawei’s EMUI and Oxygen OS from OnePlus at the third and fourth spot respectively.

The ColorOS 11 was launched after upgrading ColorOS 7 a lot. ColorOS 11 is focused on allowing users to customize their tools and features. The biggest surprise from this was the absence of MIUI from Xiaomi. In recent times, many issues have been reported on this user interface, and may be due to this reason, Master Lu has removed them from their rankings. Below are the errors mentioned in a report:

Not only Xiaomi’s MIUI but there was no room for Samsung’s One UI as well. A few of the issues were reported with this Samsung User Interface. In the form of One UI 3.0 (and 3.1) and MIUI 12 (and 12.2/12.5), both companies have recently announced significant updates for their operating systems.

But now, as they both are out of the Master Lu list, we can spot that the errors might be with these versions. The only good news for Xiaomi is the presence of Black Shark’s JoyUI 12.5 at the 10th rank of this list. The Chinese company has a major investment in Black Shark. Also, JoyUI 12.5 has been based on MIUI in the past.