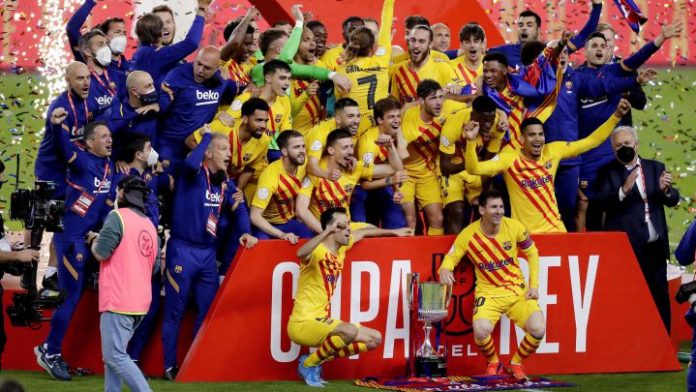 Despite losing to their eternal rivals, Real Madrid, by a 2-1 margin last weekend, Barcelona have turned around their fortunes by winning the Copa del Rey title against Athletic Club.

Lionel Messi scored a brace to guide Barcelona to a 4-0 win in the final. Koeman’s men didn’t have a good start to the season, but they have now won the Copa del Rey and have a slight chance of winning the La Liga title as well. Koeman has done a good job with the team lately, despite doubts about his Barcelona future.

Ronald Koeman said after the Copa del Rey win: “It’s a fantastic feeling. Getting to the final was difficult, with those extra time games…”

“We’re very happy and we deserved to win at least one trophy this season. The club deserves it. It’s a really important trophy for the club in a year of change. The team always had faith in winning something. It’s a happy day for all Barcelona fans. It’s a deserved success.”

“We’ve made changes to the team this season, but the players have bought into it. I want to credit the team’s attitude, especially in the Copa, where we’ve suffered a lot. We were hungry. Now we have one trophy in the bag and we’re going to go for a second. We will fight for LaLiga until the last day.”

Koeman also commented on Messi: “He’s always on hand. I don’t know what will happen [with his future].”

“Hopefully this wasn’t his last [final]. Everyone wants him to stay.”

Previous articleJoan Laporta is convinced that Messi wants to stay at Barcelona
Next articleFIFA 21 – TOTS: Voting for FIFA 21 Community Team Of The Season is now live!