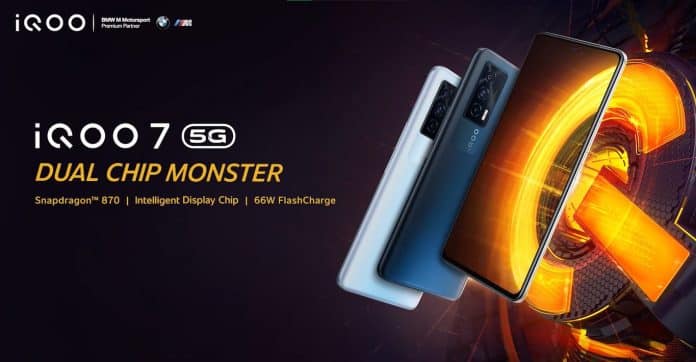 iQOO 7 series is coming on April 26 in India. The series includes iQOO 7 5G and iQOO 7 Legend and will be available via Amazon India. The iQOO 7 5G is the first smartphone in India with Dual Chip Technology. The second chip is an Intelligent Display Chip, as mentioned by us earlier, which is Pixelwork’s IRIS 5 Display Chip. We will discuss this chip later, before that let’s see the official video teased by the company.

The video shared by the company as the first teaser video of the smartphone looks quite promising. Moreover, the company had already promised that the Snapdragon 888 powered iQOO 7 Legend will be priced under Rs.40,000 in India, and that’s why it is safe to assume that iQOO 7 5G which is powered by Snapdragon 870 SoC will be priced fairly and far below the Rs.40,000 price range.

Now from the video, we saw the design of the device and as we know iQOO 7 is the rebranded version of the iQOO Neo 5 that was launched in China last month. So, all the design and external features are the same in this device as well.

The iQOO 7 5G features UFS 3.1 and an extended RAM feature along with a Display Chip. As per a tipster, “Display chip w/ MEMC will increase frame rate & also re-construct low quality images to HDR ones, improving gaming experience.”