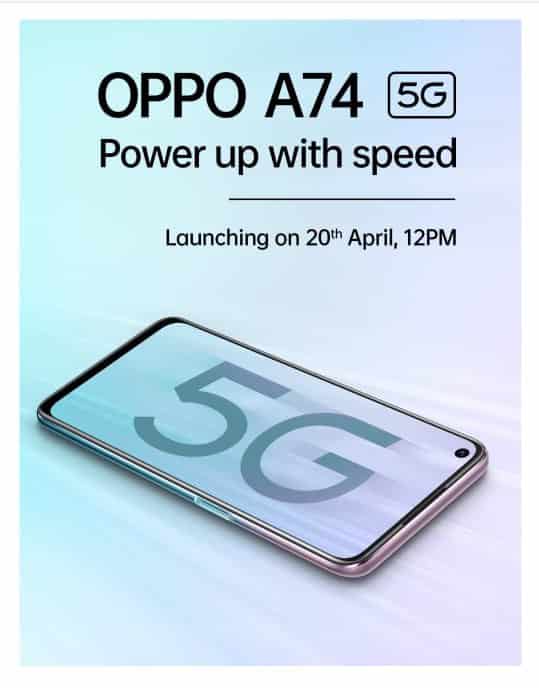 We had mentioned earlier that Oppo is going to launch an A series 5G smartphone in India in the mid-range category. The smartphone is expected to be the Oppo A74 5G that became available in various markets across Asia. The phone was first spotted on an Australian retail website. This phone is now going to be launched in India on April 20.

The Oppo A74 5G will run ColorOS 11.1 based on the Android 11 OS and will be powered by the Qualcomm Snapdragon 480 chipset, a budget 5G processor. Regarding the display, this phone is likely to offer a Full HD+ LCD display supported by a faster refresh rate of 90Hz. This phone has a side-mounted fingerprint scanner.

The SD 480 SoC of this phone will be paired with 6GB of RAM and 128GB of internal storage (other variants of RAM might be available). Coming to the camera section, this phone is likely to have a triple rear camera setup supported by an LED flash that includes a 48MP primary sensor along with a 2MP macro and a 2MP depth sensor. For selfies, this phone has an 8MP selfie snapper at the front.

The Oppo A74 5G is likely to get fueled up by a bigger 5,000mAH battery supported by 18W of fast charging. Regarding the connectivity, this phone is expected to have everything (5G is there). Like other Oppo smartphones, it will be also light-weighted, 188 grams in weight, and a thickness of 8.4mm. The pricing has not been confirmed yet but expected to carry a price tag under Rs.20,000. Apart from it, another Oppo smartphone, named Oppo A72 5G is expected to get launched in the last week of this month.