Oppo A54 launching on April 19 in India 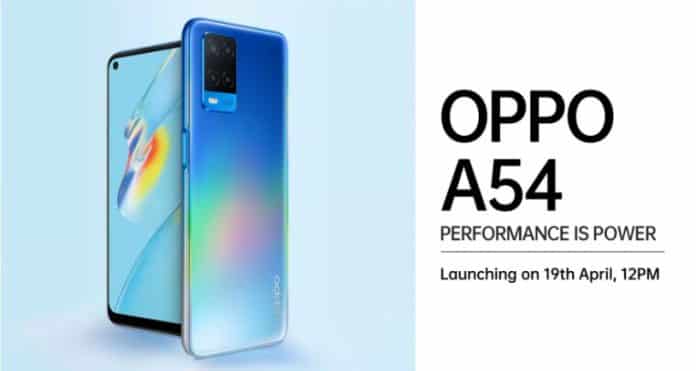 Last month Oppo launched the Oppo A54 along with A94 as to 5G smartphones in Europe (global). The Oppo A54 is now launching in India as a 4G device on April 19 at 12 PM. Oppo A54 will be available via Flipkart. This smartphone has already been introduced in Pakistan and we already know most of its features and specifications. Let’s have a look at the offered specifications and features of this phone.

The landing page created in Flipkart reveals only a 5,000mAh battery and 18W fast charging of the smartphone. Oppo’s official website of Pakistan reveals that the phone will have a 6.51-inches punch-hole display. The punch hole on the display houses a 16MP selfie camera. Around the back, we get a 13MP primary sensor among the triple rear camera sensor where the other two 2MP sensors are for Macro and Bokeh.

We get an octa-core MT6765V/CBA CPU paired with 4GB RAM and 128GB ROM. The phone runs on ColorOS 7.2 based on Android 10. Other features include 3D Curved Body, Side Fingerprint Unlock, and IPX4 Splash Waterproof design.