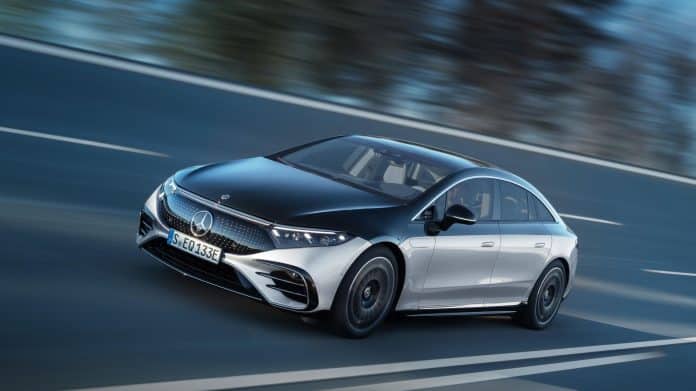 Mercedes-Benz’s 2022 EQS electric sedan has finally come out of the shadows, and the two-tone paint job is sure to raise some interesting questions. Key details such as pricing have still not been disclosed. Still, the EQS is a bold break from the current crop of minimalist electric vehicles with its huge infotainment screen, big battery, and richly appointed interior.

In the fall of 2021, when the EQS arrives at dealerships, it will be the first long-range EV from the German automaker available to buy in the US, beating out the indefinitely delayed EQC compact SUV. It will be the first of nine other EVs that Mercedes aims to release by 2022. And as a close relative of the segment-defining S-Class, the company’s high-stakes effort to define the luxury EV market depends on the EQS.

The EQS features a 56-inch Hyperscreen with the company’s MBUX infotainment system, automatic front and rear doors, the augmented reality heads-up display, and various other luxury vehicle accruements. Gone is the all-digital front end we saw with the Vision EQS concept car, replaced with a “black radiator grille” with a “three-dimensional star pattern” that is also found in Mercedes’ AMG lineup.

A popular design among EVs across different brands where the headlights are connected by a light bar is present in the EQS. No hood ornament like you would find with the S-Class is seen, but on either side of the grille, the EQS did keep the air vents, steering clear of the flat, vent-less face of the Tesla Model 3 and other EVs.

The two-tone paint scheme is certainly a choice, but it is not completely out of the blue though: Mercedes does offer a two-tone finish on its Maybach S-Class. This should not be the only finish offered, and other options are sure to be explored with a quick trip to Mercedes’ online configurator.

The EQS will be available in two trim levels to start: the rear-wheel-drive EQS 450+ and dual-motor, all-wheel-drive 580 4MATIC. We should expect both to sell for over six figures, but no pricing details have been revealed. (By way of comparison, the base model of the S-Class is priced at $110,000.) Both models will be powered by a 107.8kWh battery pack, though a 90kWh battery-powered smaller version is also on the cards soon from the company.

Built on a brand-new EV architecture for the luxury automaker, the EQS is expected to get 770km of range — or 478 miles — based on the European WLTP (Worldwide Harmonised Light Vehicles Test Procedure) cycle. That number will most likely drop when it’s eventually tested by the US EPA (the United States Environmental Protection Agency). However, it could still beat out the longest-range Tesla Model S.

Of course, EVs still represent a small fraction of overall car sales, and the mass adoption that policymakers need us to begin will not be spurred by luxury vehicles alone. But with the right combination of range, power, and affordability, automakers such as Mercedes will have their work cut out for them as we move closer to an all-electric future.

Share
Facebook
Twitter
Pinterest
WhatsApp
Linkedin
Previous articleRedmi 20X will soon launch in China as a rebadged version of the Redmi Note 10 5G
Next articleClanConnect.ai’s latest research finds that almost 60% of Indian CMOs to have dedicated budgets for influencer marketing in 2021