Sergio Ramos and Florentino Perez involved in a fiery bust-up 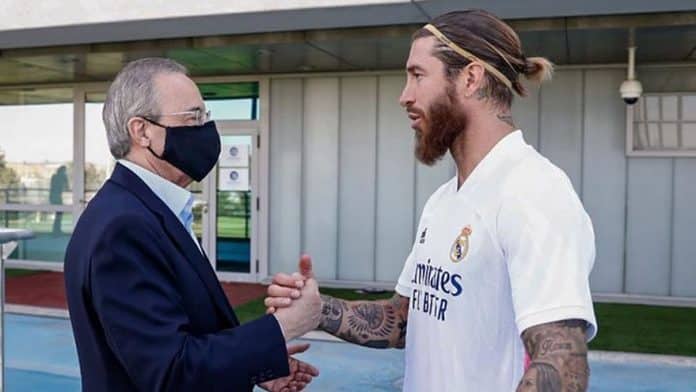 Real Madrid skipper Sergio Ramos and president Florentino Perez involves in a fiery bust-up regarding the future of the Spanish defender.

Sergio Ramos has only a few months left in his contract with Real Madrid. Earlier, Ramos refused to sign the new deal with Real Madrid. Real Madrid offered him a 1-year contract extension with the same salary. Ramos didn’t like the proposal and told Florentino Perez that he’s not going to accept that offer and also that he will now “listen to other clubs”.

Real Madrid wants to keep him for some more years. But they don’t want to sign him in an excessive deal. The Spanish national team captain is now 34-year-old. So

However, the recent meeting between them has not ended on a good note. As per El Chiringuito, TV Florentino Perez told Ramos, “We will have to plan [for next season] without you.” In response, Ramos replied, “Do it”.

Sergio Ramos joined Real Madrid in 2005 from Sevilla. In these 17 years, he has played 668 games for Real Madrid and scored 100 goals for the Los Blancos. He has won 5 La Liga and 4 UEFA Champions League titles with Real Madrid. Perez and Ramos used to have a very good relation. Some claim that it has not changed yet.

The TV show are known for fabricating situations. Real Madrid fans will surely love to believe this as they don’t want to let their ‘El Capitano’ goes this early.