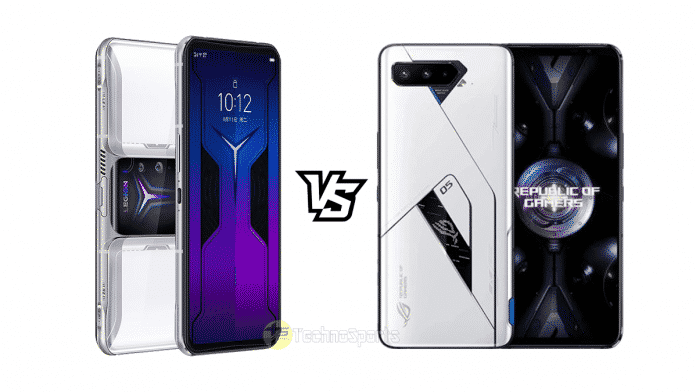 Lenovo legion Duel 2 and ASUS ROG Phone 5 Ultimate are two gaming smartphones that have been launched recently and have some cool features. Let’s see which one of these will benefit you as a gamer.

Both the smartphones are powered by the most powerful Android mobile chipset, Qualcomm’s Snapdragon 888 SoC.

In terms of optics, the Lenovo Legion Phone 2 Pro features a dual-rear camera system that includes an OmniVision 64 MP primary camera and a 16 MP ultra-wide angle sensor. For selfies and video chats, you will be offered a 44MP front snapper. ASUS ROG Phone 5 Ultimate features a similar triple camera setup with a 64 MP Primary Camera along with a 13 MP Ultra-wide Angle Camera and a 5 MP macro sensor. In front, you will be offered a 24 MP selfie snapper.

Trigger buttons are located on the shoulders and on the back of the ASUS ROG Phone 5. A mini-monitor is also included to assist gamers in viewing their screen when playing a game.

The Lenovo Legion Phone 2 Pro features a robust twin-turbo fan active cooling system in which one fan will intake cool air while the other fan will push out the hot air. For passive cooling, Lenovo also provides a vapour chamber with liquid cooling.

The Legion Phone 2 Pro comes in five different models which are the following.

Read More: Snapdragon 888 vs Snapdragon 865 vs Apple A14 Bionic: Which is the better one is better?

As a gaming smartphone, you need a strong battery backup and a longer screen. The Legion Phone 2 Pro has a bigger display and apart from the missing macro sensor, it defeats ASUS ROG Phone 5 Ultimate Edition in the camera specs as well. This is due to a better ultra-wide-angle and front camera. ASUS does you some special experience. It comes with a mini display which can be useful but taking price and specs, we will go with Lenovo legion Phone 2 Pro.