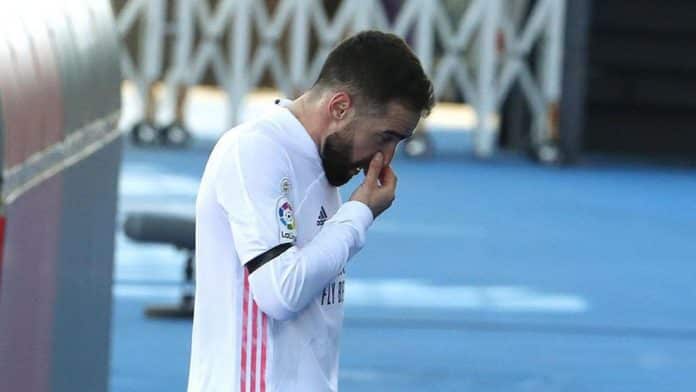 Real Madrid travel to Anfield in arguably one of the most highly dreamed of fixtures by Liverpool fans in years. While Los Merengues have a 3-1 lead to fall back on when they go to England, they also have a heavily weakened defence due to the ever-growing injury list this season.

Sergio Ramos and Raphael Varane will be out for the return leg, with the skipper suffering a muscle injury on international duty while Varane is isolating after contracting COVID-19. The centre-back pairing of Eder Militao and Nacho Fernandez, who did well to hold up the defense in El Clasico, will face another high stakes fixture within the span of only a few days since their game against Barcelona.

Dani Carvajal will also be out for the game, alongside Lucas Vasquez, and this will push Zinedine Zidane to make a choice as to who plays in right-back. Positionally, Alvaro Odriozola becomes the natural selection since he is the only fit right-back at the club. However, the player’s lack of confidence and playing time make it debatable as to whether he will be given time in the second leg.

Zinedine Zidane clearly does not have enough faith in the player, deploying an attack minded player like Lucas Vasquez ahead of Odriozola when Carvajal got injured. Hence, whether or not the Spaniard will be trusted to operate against Liverpool is a question worth asking.

The most sensible decision in this case, would be to choose a back three as Zidane has done on multiple occasions this season, using Marcelo and Odriozola as wing backs and a centre-back pairing of Eder Militao, Nacho Fernandez and Ferland Mendy.