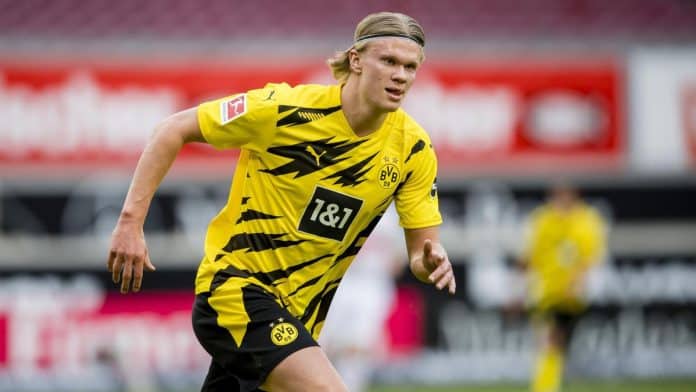 Erling Braut Haaland is a goal-poaching striker with a great future ahead. He is one of the hottest prospects in Europe currently. He is going to be the primary target for multiple top-tier clubs in Europe this summer. Teams like Real Madrid, FC Barcelona, Manchester City, Manchester United, and some other clubs are monitoring his situation at Dortmund.

The Norweigan joined Borussia Dortmund in the January transfer window in 2020 after a blistering UCL campaign with Red Bull Salzburg. The 20-year-old striker has continued his form at Bundesliga as well. In his 52 appearances for the German giant, he has scored 49 goals. His ruthless finishing has caught the eyes of everyone.

As per some reports, Dortmund is not interested to sell him next summer. But Haaland’s agent Mino Raiola is holding talks with multiple clubs. Recently in an interview with SPORT1, he said, “I can confirm that I was in Dortmund for talks.”

“Michael Zorc made it clear to us that Dortmund does not want to sell Erling this summer.”

“I respect this opinion, but what does not automatically mean that I also agree.”

“Dortmund were very clear in their views. We are okay with that.”

“There is no war between us and Dortmund – absolutely not!”

Haaland has a release clause of €80 million in his contract with Borussia Dortmund. However, it won’t become active until the summer of 2022. Until then, it is tough to find a buyer for the young striker.