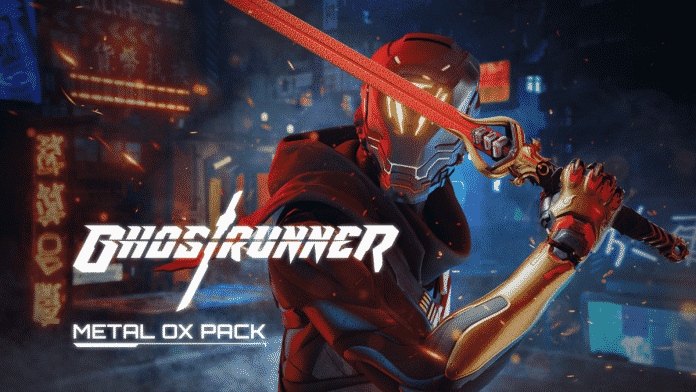 CALABASAS, Calif. — April 13, 2021 — Co-Publishers 505 Games & All In! Games alongside developers One More Level, 3D Realms, and Slipgate Ironworks™ today launch free game modes and the paid Metal Ox Pack for Ghostrunner, the first-person cyberpunk parkour action game. The company also unveiled a physical edition of Ghostrunner is in development for Nintendo Switch and will launch on June 25 in Europe and June 29 in the U.S.

The free updates launching today include Kill Run Mode, a game mode with strict time goals and Dharma Tower’s greatest challenge. In Kill Run Mode, players slay enemies to add precious seconds to the timer, dash through sections as quickly as possible, and ascend to new heights on the leaderboards. Players can also capture their most stylish moments from a whole new perspective with Photo Mode. Break the fourth wall for the perfect angle and see Ghostrunner’s entrancing cyberpunk world like never before.

Ghostrunner’s upcoming physical release on Nintendo Switch will include every update since last year’s digital launch, including performance and stability improvements, control refinements, and upgraded graphics.

In humanity’s last city, an augmented bodyguard fails his duty and loses everything. From the grim depths of Dharma Tower, the Ghostrunner must ascend a world that has already ended, past authoritarian legions that want him dead, to fight a ruler who defeated him once before. Master speed, agility, and violent reflexes only cybernetic enhancements can bestow. Wall-run, air dash, grapple, and defy time to survive a brutal world where a single hit means death.

Ghostrunner is available now on Nintendo Switch, PlayStation 4, Xbox One, Amazon Luna, and PC via Steam, the Epic Games Store, and GOG. Ghostrunner will come to PlayStation 5 and Xbox Series X|S in 2021, with a free upgrade available for owners of the PS4 or Xbox One versions.

Ghostrunner is published by H2 Interactive for Nintendo Switch and PlayStation 4 in Asia; H2 will communicate the Japanese release date soon.
For more information about Ghostrunner, including full language support, visit the official website.