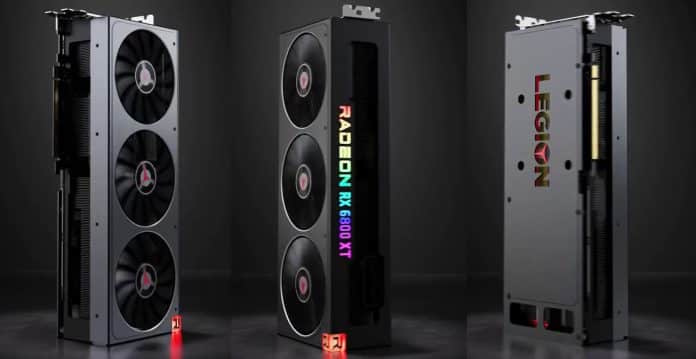 AMD’s Radeon RX 6000 series graphics cards have been released in the market, and it is slowly but surely making its way to our PCs. In recent news, Lenovo, one of the world’s largest PC makers, has now started to manufacture a custom variant of the Radeon RX 6900 XT graphics card.

Sporting a rectangular shroud, its triple-fan cooler design is the same thing that Lenovo carries from the original AMD design. The card also carries an “R” logo in a cube in the bottom corner. Lenovo has also added RGB lighting for the lettering on the card. The backplate has been modified to feature the Legion brand’s logo.

According to sources, the Lenovo Radeon RX 6900 XT & Radeon RX 6800 XT Legion will both be powered by two 8-pin connectors and the max TDP is 300W. Not just that, but both the cards will also feature 16GB of GDDR6 memory & 128 MB of Infinity Cache.