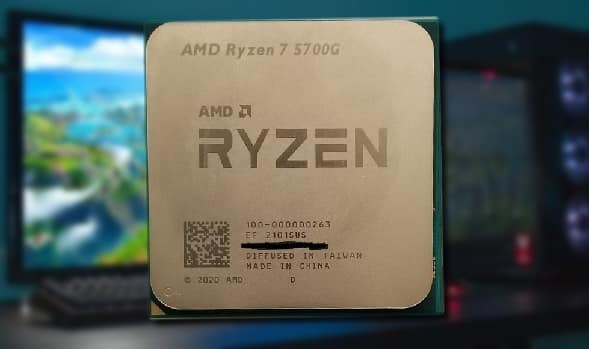 AMD’s Ryzen 5000G Cezane desktop APUs are finally on the verge of being released in the market, and we seem to get more and more benchmark info about the upcoming processor cards from Advanced Micro Devices.

According to fresh sources, the Ryzen 7 5700G live image and some benchmark data were shared on the Chiphell forum (via VideoCardz). We also know from GPU-Z scan that the AMD Ryzen 7 5700G also has the Radeon Vega 8 Graphics.

According to the leak, the GPU has a configuration of 512:32:8 (unified shaders/texture mapping units/ROPs). It has the same specifications as the Ryzen 7 4700G’s integrated GPU. Also, the Renoir chip’s Vega 8 has a base clock rate of 2.1 GHz, the newer Cezanne SKU’s graphics processor is measured at 2.0 GHz.

From the benchmark, we found that the CPU had a decent performance. It recorded amazing 631.3 points (single thread) and 6,782 points (multithread) on CPU-Z. Going by the scores, we found that the AMD Ryzen 7 5700G is +16.69% ahead in single-thread processing and +16.78% up in multi-thread testing over its Renoir predecessor.

Owing to the global chip crisis and the increase in demand for high-performance chips, if the CPU ends up as official purchase models, they will suffer the same faith as the now released CPUs and GPUs. However, if AMD decided to launch the Cezanne chips as OEM only then, it would be a completely different story.